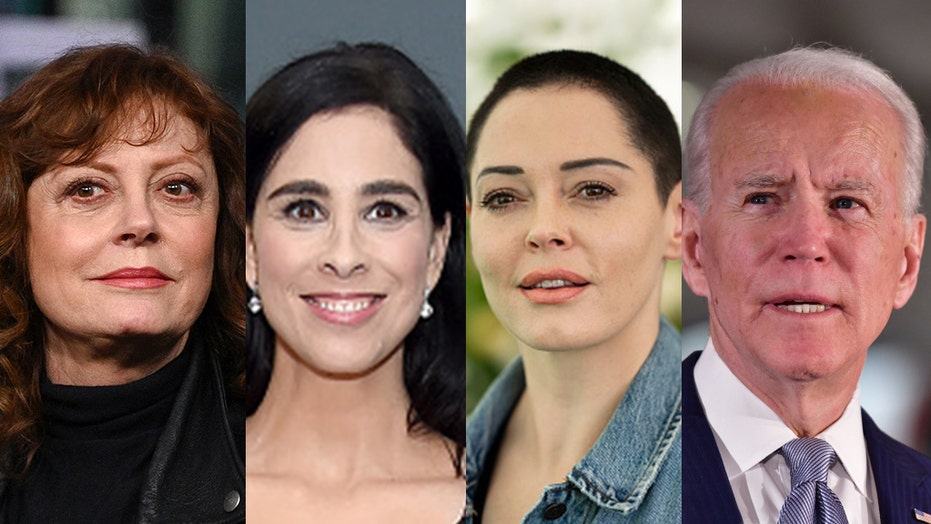 Get all the latest news on coronavirus and more delivered daily to your inbox.  Sign up here.

The Joe Biden campaign and its Democratic Party supporters have been doing their best to downplay former aide Tara Reade's sexual assault allegations against the presumptive Democratic presidential candidate, but many staunchly liberal Hollywood stars are still taking notice.

Reade's month-old claims gained steam last week after a clip from a "Larry King Live" episode from 1993 that allegedly includes Reade's mother alluding to the incident resurfaced. In an interview with Fox News earlier this week, Reade confirmed it was her mother's voice overheard on the other end of the phone.

Outspoken actress Rose McGowan went on Twitter to demand justice and call out Biden for ignoring the claims.

"TARA READE IS TELLING THE TRUTH," McGowan, who boasts 925,000 followers, wrote Friday following the resurfacing of the 1993 clip.

The actress-turned-activist took her beliefs one step further with a missive lashing out against the Democratic establishment and the media.

“I thought democracy meant…I had a right to choose those who lined up with my value system,” continued. “But what if there’s no one?”

She went on to say that she had been raised on the idea that the Democratic Party “were the good guys” and that she felt “really quite a sense of loss.”

McGowan previously labeled her former "Charmed" co-star Alyssa Milano a "fraud" for ignoring Reade's claims. This may or may not have prompted Milano, a #MeToo advocate and Biden supporter, to break her silence with a piece titled "Living in the Gray as a Woman" published by Deadline.

In it, Milano insisted that Reade's allegations against Biden "concern me, deeply," but that Biden is someone "who I can’t picture doing any of the things of which he’s accused."

Still, Milano went on to offer Biden some advice as to how to handle the allegations going forward.

"I’d advise him to face the allegation head-on, answer every question, and admit any wrongdoing, and to be the example for all men who face these kinds of accusations whether founded or not," Milano urged her preferred candidate.

Sarandon's profile shows that the star retweeted three Twitter posts regarding the 1993 video clip, in which a caller to the King show, later confirmed to have been Reade's mother, asks King for advice regarding her daughter -- whom the caller claims had “problems” with a “prominent senator” for whom the daughter worked.

Sarandon has been a vocal Sanders surrogate at least since the 2016 campaign. She said in a 2017 interview she couldn’t bring herself to vote for Hillary Clinton in 2016 and has slammed Biden recently for not being progressive enough.

On Wednesday, comedian Sarah Silverman was the latest liberal to break her silence on Reade's allegations, this time calling out Senator Kristen Gillibrand (D-N.Y.) for voicing support for Biden after being one of the loudest voices calling for fellow Democratic senator Al Franken's resignation following accusations he jokingly groped a woman while she was asleep.

"But u called on ⁦@alfranken⁩ to resign w/out the ethics investigation HE asked for??" Silverman tweeted in response to an article titled "Kirsten Gillibrand on Tara Reade allegation: 'I support Vice President Biden.'"

Reade said in a March interview that in 1993, she was asked by a more senior member of Biden’s staff to bring the then-senator his gym bag near the Capitol building, which led to the alleged encounter.

She said when she met him, he pushed her against a wall.

“His hands were on me and underneath my clothes, and he went down my skirt and then up inside it and he penetrated me with his fingers and he was kissing me at the same time and he was saying some things to me,” she said.

Biden’s campaign has vehemently denied the accusations, which others have also called into question because Reade said she doesn’t remember where the assault happened and some details in her story have changed over time.

“Women have a right to tell their story, and reporters have an obligation to rigorously vet those claims. We encourage them to do so, because these accusations are false,” Kate Bedingfield, deputy campaign manager and communications director for the Biden campaign, said in a statement to Fox News last month.