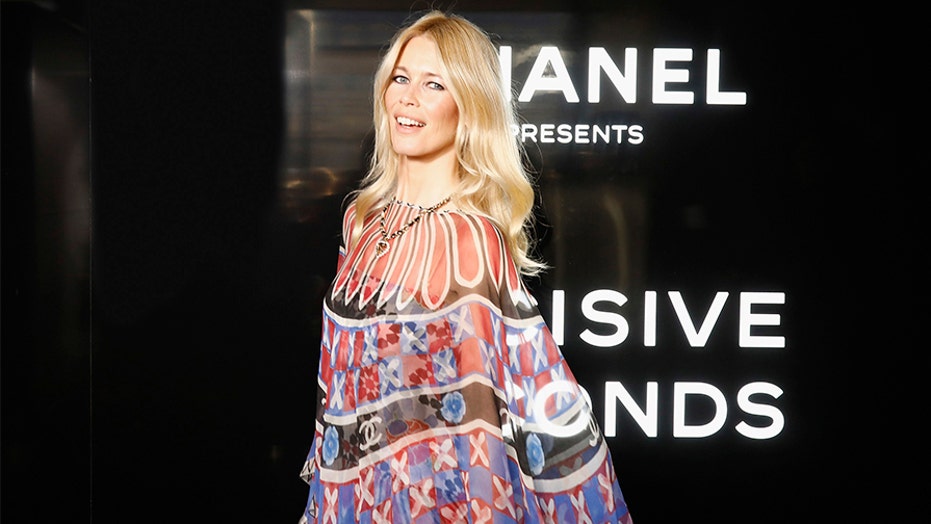 Claudia Schiffer, who successfully made her mark in the ‘90s as one of the most sought-after supermodels, is eager to move on.

“I’ve had many wonderful compliments in my time,” the 49-year-old told Elle UK for the magazine’s May 2020 issue.

“But then you get to the next stage and you move on,” the runway star continued. “You don’t have to be called [beautiful] your entire life. It’s a nice memory, but then the next generation starts and you hand over. For me, it’s a natural thing to do… to hand over, to not be envious or jealous. As a matter of fact, I can’t think of anything worse right now than if you said, ‘There’s a magic pill and it’s going to make you look 20 again.’”

Schiffer’s life these days is different from the glitz and glam of yesteryear. According to the outlet, the German beauty is married to film director Matthew Vaughn and they’re raising three children in an Oxfordshire home. While Schiffer is still keeping busy in the fashion world, she does little interviews and instead, is determined to protect her family’s privacy.

Claudia Schiffer walking the runway, circa 1991. (Photo by PAT/ARNAL/Gamma-Rapho via Getty Images)

“It was insane,” Schiffer reflected on her past. “Like being a rock star. You couldn’t get to your car unless a path was carved for you. People would cut holes in the fashion tents and try to take pictures of us. We had security at every fashion show.”

Schiffer added that even security was employed to guard her underwear.

“When I was out on the runway I’d come back and constantly my underwear would be gone - my bra, my knickers… gone!” she said.

Despite her fame, Schiffer said she was always determined to maintain her reputation and not be swayed by the temptations that came with her role.

JOHN TESH RECALLS HOW HE WAS 'READY TO TAKE’ HIMSELF ‘OUT’ WHILE BATTLING CANCER: 'I WAS ANGRY AT GOD'

“I would just do my work and go: ‘I’m leaving! I’m rushing out the door!’” she explained. “There were constantly parties after dinner, but I always thought, ‘I must succeed, I must be the best, I must go from place to place and not take time off. So there was rarely ‘Let’s have drinks’ afterward. It’s very dangerous opening that up, and sometimes unpredictable.”

“I was lucky,” she continued. “But I would definitely say to the younger generation of models, it’s a job at the end of the day - just don’t mix it in with anything else. Sometimes, of course, you can’t avoid it, even with those rules.”

Schiffer also told the outlet she was spared from “any form of sexual intimidation,” but she did endure challenges in other areas of her career.

“I have seen it and it’s not nice,” said Schiffer. “I’m not talking about sexual terms, but just bullying and exercising of power that you don’t need. Or asking for things that you don’t need. I’ve seen that a lot and I’ve made a mental note that I don’t want to work with those people again. And I haven’t.”

NATALIE WOOD’S DAUGHTER RECALLS GROWING UP WITH THE STAR: ‘THE NARRATIVE HAS BEEN SKEWED TOWARD THE TRAGIC’

SI SWIMSUIT FINALIST TANAYE WHITE RECALLS MEETING KATE UPTON: ‘YOU CAN’T HELP, BUT WANT TO BE AROUND HER’

“Sometimes they are not great people, but at the same time the photos are really great and sometimes you make compromises,” she added. “And that’s life.”

Schiffer also stressed that other supermodels use their fame to boycott bullies in the industry.

“There was camaraderie in that sense,” she said. “If somebody had a bad experience or if they felt they were treated unfairly, [we] would call everyone and say, ‘By the way, this just happened.’ We thought, ‘We had the power altogether and we should use it because this is wrong.’ We made things change.”

When Schiffer learned her interviewer’s husband is a writer, she had one final message to share.

“I think, for me, being a writer is the perfect job,” said Schiffer. “You’re known for your name, not particularly for how you look. So you can have a completely private life, yet have all the glory from your name. And you can do it from wherever you are. You can just do your bit of work, live in the middle of nowhere and [your work] speaks for itself.”