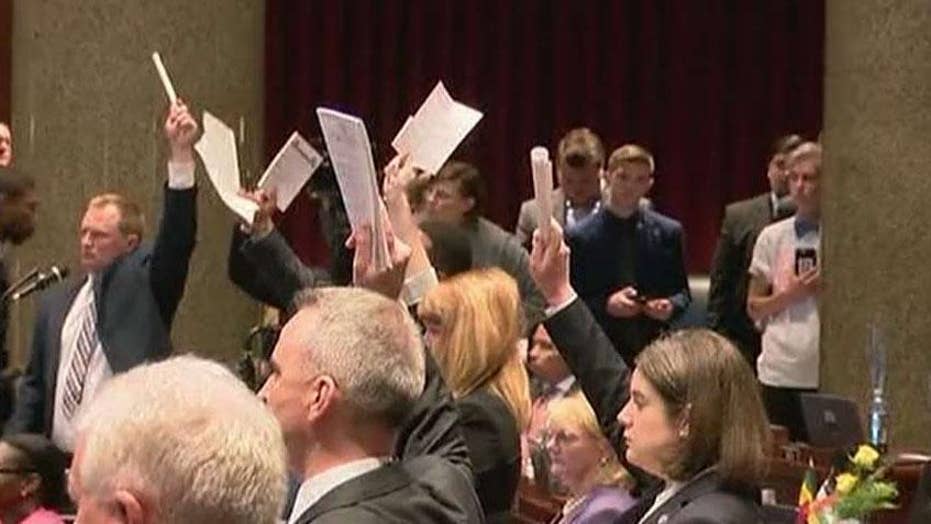 On the heels of the Alabama state Senate passing US’ most restrictive abortion legislation, "Saturday Night Live" tackled the topic twice during its Season 44 finale.

Leslie Jones tore into the new law, which followed similar legislation restricting abortion in several other states, including Georgia and Missouri, during "SNL‘s" "Weekend Update."

Appearing alongside co-host Colin Jost, Jones was wearing a "Handmaid’s Tale"-style outfit which has become a symbol of women’s resistance against the slew of state abortion bans.

'SATURDAY NIGHT LIVE' RATINGS INCH DOWN, BUT GET A BUMP FROM HOST PAUL RUDD

Asked by Jost about her Handmaid’s Tale clothes, Jones said, “We are all handmaids. My name actually is OfJost.”

Jones proceeded to remove the red robe to reveal a black shirt that said “MINE” with an arrow pointing south. She made a passionate speech in defense of women’s right to choose.

“The next thing you know, I’m at Starbucks and they won’t take my credit card because I’m a woman instead of the regular reason, which is I don’t have no money on me.”

Jones showed photos of the 25 white Alabama State Senators who had voted for the abortion ban.

“This looks like the cast of Lipitor commercial,” Jones said. “These look like mugshots of everyone arrested at a massage parlor.”

She then continued.  “You can’t control women because, I don’t know if y’all heard, but women are the same as humans. And I’m Leslie Dracarys Jones. “Why do all of these weird ass men care what women choose to do with their bodies? I don’t care what you do with your 65-year-old droopy a— b—s.”

“When women have a choice, women have freedom,” Jones exclaimed to huge applause.

“The fact that nine states are doing this means this really is a war on women,” Jones said in conclusion. “You can’t tell me what to do with my body.”

The topic also was addressed a few minutes late in a sketch spoofing "The View."

KENAN THOMPSON TO REMAIN ON 'SATURDAY NIGHT LIVE,' WILL WORK OUT SCHEDULING WITH NEW SHOW

Kate McKinnon as Joy Behar slammed the Senators who had voted to pass the law. “They’re so concerned with what happens to a six-week fetus because they all look like one,” she said.