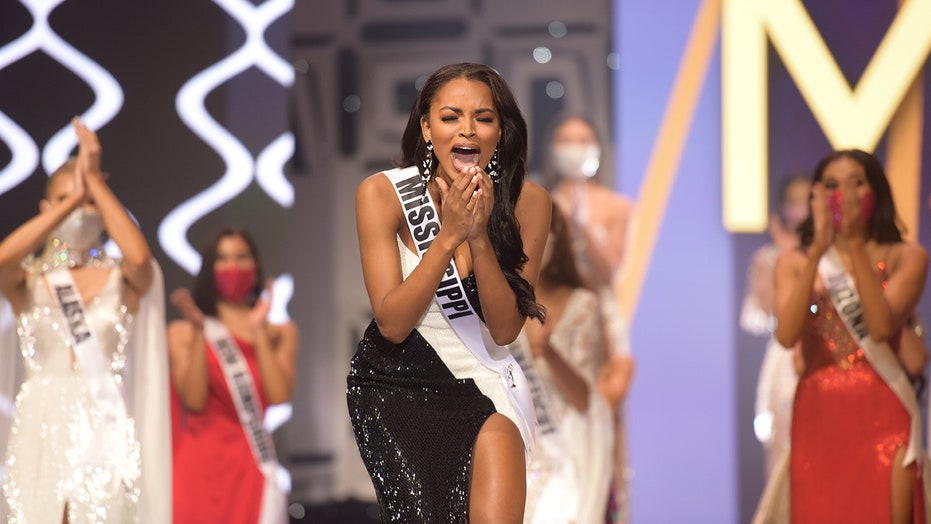 EXCLUSIVE: Asya Branch is still stunned that she was crowned the winner of Miss USA’s 2020 pageant.

The competition aired on Nov. 9 after being postponed months from its original spring date due to the coronavirus pandemic. The live show took place at Elvis Presley’s Graceland in Memphis, Tenn. The 22-year-old was crowned by Miss USA 2019 Cheslie Kryst, 29.

Branch, the sixth of eight siblings, previously made history as the first African American to be named Miss Mississippi. At the pageant, Branch discussed her stance on gun laws in a final statement before judges crowned a winner. She plans to continue raising awareness on criminal justice reform, a cause that hits close to home. Branch previously revealed her father was incarcerated for 10 years, which greatly impacted her family.

Branch spoke to Fox News about why she pursued the pageant world, her stance on gun laws, meeting with President Trump, and how her Christian faith helped her overcome a painful past.

Fox News: What does being Miss USA mean to you?
Asya Branch: You know, it's been a dream of mine for so long. And it’s one of those things where you work so hard and you pray for it to happen, but when it actually does, it's so hard to believe.

So it's truly an honor. I just think being able to hold this title and to reach a broader audience means so much for me because I'm able to spread positivity with others. If I do nothing more than spread some positivity and embrace the theme of the crown, the power of positivity throughout this year, then I will be happy with that.

Fox News: How passionate are you about criminal justice reform?
Branch: Being the child of an incarcerated parent, I’ve seen firsthand how it affects the family. I have been able to see how much things need to be changed within our prison systems. I saw how much I struggled, now my family struggled.

We went through it and yet many people had no idea. They often don’t see that other side. So I really wanted to dive into that. I wanted to raise awareness on the unheard voices, the struggles that not only children of incarcerated parents face, but the inmates who are also parents. I started working with at-risk youth and sharing my story. I want to encourage them, inspire them and give them an example that is relatable today.

Fox News: How was your day-to-day life impacted while your father was behind bars?
Branch: It was a gradual thing, but it was constantly one thing after another. My father was the foundation of our family and our main source of income. My mom did everything in her power to try to continue allowing us to lead our best lives, but she was on a teaching assistant salary while caring for four children. She had to go back to school in order to become a full-time teacher.

That required me to step up and cook dinner, take care of my siblings, go to school and take care of myself at the same time. At one point, our home was foreclosed. We didn’t even know if we would get a roof over our heads. Luckily, we had some close friends who were willing to step up, help us and become our lifelines. They helped us have running water and food in our fridge. Those were some of the struggles we face. We didn’t know where our next meal would come from. We didn’t know if we would have a roof over our heads the next day.

Fox News: How were you coping during such a difficult time in your life?
Branch: I constantly had to remind myself of two things. One, my dad always told me that branches bend, but they don’t break. So I had this mentality of always having to stay strong and never let people see my weakness.

MIKE ROWE HONORS VETERANS BY 'RETURNING THE FAVOR': ‘EVERY GOOD AND DECENT THING WE ENJOY WAS PAID IN BLOOD’

Two, I’m a Christian. I really relied on my values and my faith. My faith helped guide me and it really gave me the strength that I needed. I think that’s how I got through everything. Also, school was there for me. It helped me stay busy. I was so happy on my dance team, math and science club, drama club - anything I could get involved in, I did it to keep my mind active. I wanted to distract myself from all the hurt and pain I was feeling.

Fox News: You previously attended a roundtable that addressed criminal justice reform with President Trump at the White House. What was that experience like for you?
Branch: It was really amazing to have that opportunity, to have a seat at such an important table, and be part of a discussion that really made a difference in our criminal justice system. I think the progress was good at that meeting. I was able to share my experiences as a child of an incarcerated parent and the perspective that comes with that.

It led to the passage of the First Step Act, which helps rehabilitate and reacclimate inmates back into society. Hopefully, it will trickle down to our states. It was an honor to have a voice at and a seat at that table to make a difference for an issue I’m extremely passionate about.

They have a pretty tough stance there. I think showing them my unique perspective and the changes that I’ve worked so hard towards over the years - hopefully, I can change their viewpoints in a progressive direction with criminal justice reform and truly impact our nation in a positive way.

If we can help our inmates, then we can help our society. Because when these inmates return to society, they can be productive citizens and really aid to the good in the world. So I would love to talk to them about [those issues].

Our justice system is very important and maintaining humanity within it is something that I believe in. I’d be eager to speak with the Biden administration and share my unique perspective on criminal justice and prison reform.

Fox News: During the competition, you brought up the Second Amendment. How important was it for you to raise this issue?
Branch: You know… there’s always going to be people that will agree or disagree, but my whole focus here was on the safety surrounding guns. I think it’s been misconstrued in terms of where I stand. I think it’s completely fine for judges to restrict gun ownership to someone who may pose a threat or risk to themselves or others.

But for people who don’t pose as a threat to anyone, I think we should tighten up our safety and make sure they have gone through all the proper courses of safety and ensure they have all the training under their belt that’s necessary for them to have firearms. As far as military weapons, I don’t think civilians need to be in possession of those.

Fox News: Take us back to that moment when you won the crown. What was going through your mind?
Branch: You know, it’s all a blur, but I remember that I had to think for a second. Did they really just say Mississippi? It was a moment of pure joy and excitement but at the same time with a sense of humbleness.

Fox News: What was it about the pageant world that drew you in?
Branch: At first it was the sparkle, the glitz and glam. But after I participated in my first pageant, I realized it was an opportunity for me to develop as an individual, to help boost my self-esteem and my self-confidence, and to really grow as a person and embrace how I am.

I wanted to be competent in every ounce of my being. But it also helped me improve my communication skills. It helped me get over my stage fright. I think pageantry has helped me overall. I have learned so many skills that have carried me very far as a person.

Fox News: Your father is a retired military veteran. Can you tell us more about that?
Branch: He had to retire before I was born actually because he was injured. But he always instilled in us the importance of respecting our country and respecting everyone that we encounter. I feel that I developed a great respect a love for our country at an extremely young age that I still carry with me today proudly.

Fox News: How does your father feel about your Miss USA win?
Branch: Oh, I’ve never seen him so proud and overjoyed. I think he actually shed a tear, too *laughs*. He’s very happy for me. This has been a dream of mine and he only wants to see me succeed. And so to see me make my dreams a reality, I think it’s really touched his heart. I think he was very happy to be a part of this dream.

… [My siblings] were all very excited for me. I think they have helped me continue to push for my dream because I want to continue setting an example and being a role model for them. They have shown me so much love and support. And they are in my corner.