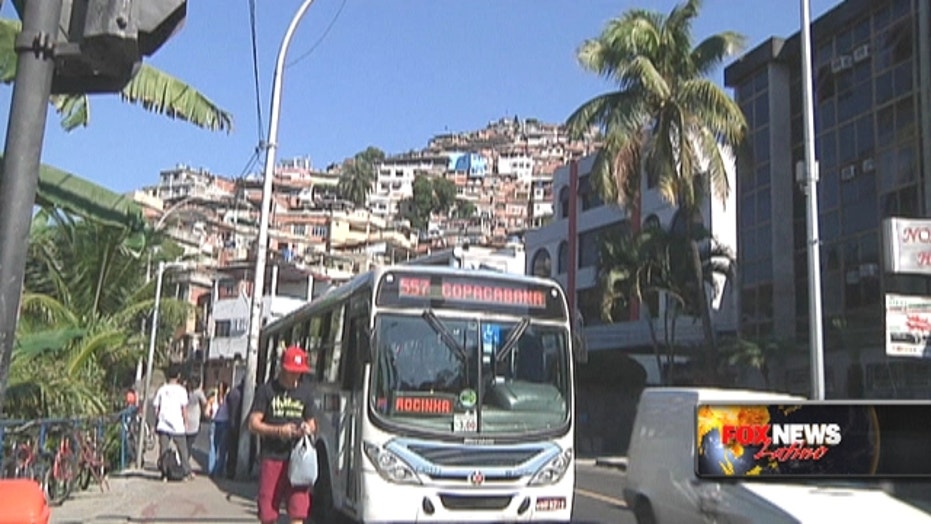 Rio de Janeiro’s hillside favelas are seeing an influx of tourists, money – and police – for the World Cup.

Rio de Janeiro – Looming over one of the the city’s most affluent neighborhoods, the favela of Vidigal rises in a maze of narrow streets clogged with motorcycle taxis, Volkswagen "kombi" vans and makeshift concrete and rebar homes wedged into the steep hillside of Rio de Janeiro’s Morro Dois Irmãos (Two Brothers Hill).

Up until about two years ago, this urban slum – home to 30,000 people, at one point including many of the actors from the internationally successful crime film, "City of God" – was like most of the more than 1,000 favelas that dominate the landscape of Rio de Janeiro: drug gangs ruled like feudal lords, basic services like gas, electricity and water were either pirated or nonexistent and the favela was considered a no-go zone for anyone who didn’t already reside there.

The announcement that Rio would play host to some matches of the 2014 World Cup and the 2016 Summer Olympics, however, put a focus on Vidigal and the other favelas. Looked at as an eyesore by city officials concerned about bad press and the delicate sensibility of the thousands of visitors flocking to Rio de Janeiro for those events, the state government began a massive – and controversial – “pacification” campaign in 2009 that sent helicopters, heavily armed vehicles and police into the favelas.

“The function of the military police in the favela is to try to show the citizens of the neighborhood the importance of following the rules,” Carlos Martins da Veiga, the commander of the Pacifying Police Unit (UPP, in Portuguese), told Fox News Latino. “Before the UPP, drug dealers made the rules.”

With the UPP now a permanent presence here, residents say Vidigal is like an entirely different neighborhood. The open-air drug markets are gone, police vehicles are a ubiquitous sight and, maybe most surprisingly, tourists and some new residents from places like the United States, Sweden and Argentina roam through the favela in safety.

The so-called pacification campaigns have been widely credited with the wholesale changes. Some, however argue that part of this change was spurred on by a small group of entrepreneurs who saw Vidigal – with its stunning view of Rio de Janeiro and the Atlantic – as an ideal locale for cheap rooms favored by backpackers and budget travelers looking for a more authentic Brazilian experience than that provided by accommodations in the posh neighborhoods of Ipanema and Copacabana.

Six years ago – long before the pacification of the favela began – Tito Braga opened up the doors of a home he owns in Vidigal to travelers. Today, Braga and his wife, Vanessa Meireles, operate one of more than 20 hostels and guesthouses in Vidigal, all of which are filled up in preparation for the World Cup.

From their private home overlooking a slice of the ocean to the postcard-worthy views and famed dubstep parties of the Alta Vidigal Hostel, these new accommodations are cropping just as Vidigal is becoming a chic neighborhood for artists, musicians and even David Beckham.

“When Tito started he was the first one,” Meireles told FNL. “Now there are a lot, a lot of hostels.”

While hostel owners have no qualms admitting that they are profiting from the tournament (“we’re completely booked up,” Meireles said), the police are unwilling to state outright that the pacification campaign was a result of the major sporting events that were about to descend on Rio.

“The goal of the UPP is to protect all people, tourists and natives,” Martins da Veiga said. “The UPP is here forever. We have no plans to go anywhere.”

The work of the police has made some people living in the area – especially some of the new arrivals – feel a sense of security that had been absent in Vidigal only a few years back.

“I’ve never felt unsafe, I’ve always felt really good about being here ever since day one,” David Grindstaff, an English-language teacher who moved to Vidigal from California about two years ago, told FNL. “This place is just one beautiful community.”

This optimism, however, is contradicted by other people, who see more nefarious aspects of the UPP.

More than 20 police who patrolled Latin America’s largest favela, Rocinha, face charges for the torture, disappearance and presumed death of a resident, who they were questioning in an effort to find caches of guns and drugs.

Some residents say that although police have established permanent posts in the favelas, the Rio de Janeiro state government has failed to set-up the strong social programs it promised and that the UPP presence in the favelas is just window-dressing that will disappear after the World Cup final on July 16.

“They say this isn’t for the World Cup, but I’m sure it is. Completely sure,” Meireles said. “Before they didn’t care for the poor people living here.”

Adding to this unease is the fervor from critics both in Brazil and abroad about what has been described as the gentrification of places like Vidigal. The forced eviction of many favela residents because of constructions projects – most notably those who had been living near the newly-refurbished Maracanã stadium – have displaced around 20,000 people in Rio alone, and rising rents in places like Vidigal have forced some residents to find new homes in more remote and more dangerous favelas.

“One of the things that was most frightening to me when I was in Brazil was the idea that a lot of these communities, the poorer communities, which are very precious, which are very community-based could be destroyed,” Dave Zirin, author of “Brazil’s Dance With The Devil: The World Cup, The Olympics and the Fight For Democracy” told FNL.

Whether the UPP presence and the influx of money into the favelas is a good thing for these neighborhoods or not is still very much up for debate, but one thing seems certain: There are more visitors heading up the hills of Rio into neighborhoods that were once off limits except to those who lived there. Some people in Vidigal claim that tourists are actually in more danger of becoming victims of crime in the richer neighborhoods than they are in the favelas.