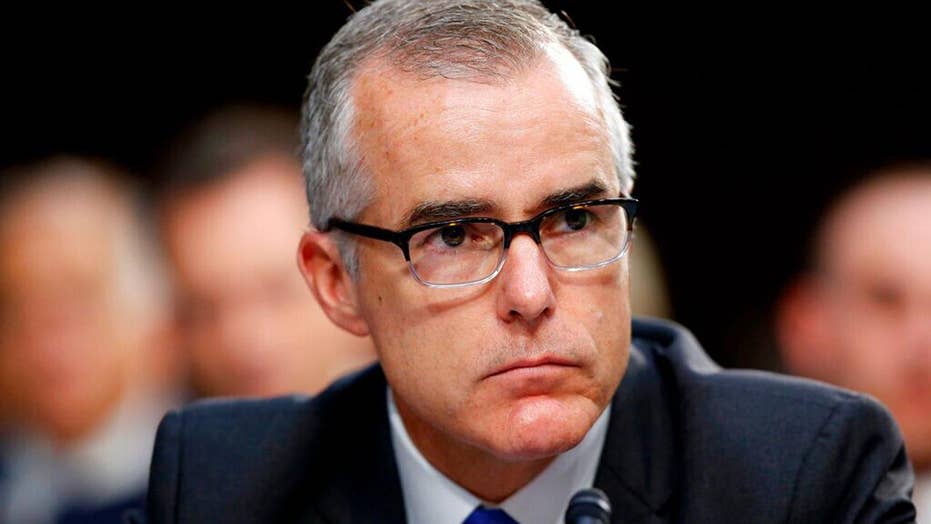 Former FBI Deputy Director Andrew McCabe has apologized to an FBI investigator for changing his story about leaking to the press, according to newly-released documents.

CNN pundit Andrew McCabe apologized for lying to federal investigators concerning a 2016 leak to The Wall Street Journal about the Hillary Clinton email probe, but you wouldn't know it if you were tuning in to his employer.

The transcripts released by the Justice Department specifically raised the possibility that ex-Deputy FBI Director McCabe, now a paid CNN commentator, could face a false statements charge similar to the one leveled against former national security adviser Michael Flynn.

ANDREW MCCABE IRKS SOME CNN COLLEAGUES: ‘I HAVE NO SYMPATHIES FOR HIM’

CNN had not covered news of McCabe’s apology in regards to the Wall Street Journal leak through Monday morning, according to a search of the network’s transcripts.

McCabe has even made at least two appearances on CNN since the transcripts were released, once to discuss the conflict with Iran on Jan. 3 and another time to opine about Trump’s impeachment on Jan. 5.

Some CNN staffers were stunned when the network that touts a “Facts First” slogan hired McCabe in late August after he was fired from the FBI for lying.

CNN did not respond to a request for comment about McCabe’s apology for lying to federal investigators. CNN also did not respond when asked to confirm that it didn’t cover news of the transcript showing as much.

The Office of the Inspector General concluded in 2018 that McCabe "lacked candor" when speaking to then-FBI Director James Comey and DOJ Oversight and Review (O&R) internal investigators about the leak to the Journal on May 9, 2017. In the transcripts, released last week, an unidentified O&R investigator asserted that McCabe had claimed "he did not grant anyone permission to divulge the information to the media" and that he "personally hadn't shared the information" or "granted anyone else permission to."

But on Aug. 18, 2017, McCabe's story changed when he was confronted with other evidence, including emails and witness accounts, which conflicted with his prior statements. Asked again whether he was aware of the leak to the Journal and had personally authorized it, McCabe was unequivocal.

"And as nice as could be, he said, 'Yep. Yep I did,'" the FBI agent said, according to the transcripts.

The Journal story -- written just days before the presidential election – focused on the FBI announcing the reopening of the Clinton investigation after finding thousands of her emails on a laptop belonging to former Democratic Rep. Anthony Weiner, who at the time was married to Clinton aide Huma Abedin.

The Journal's account of the call said a senior Justice Department official expressed displeasure to McCabe that FBI agents were still looking into the Clinton Foundation, and that McCabe had defended the agency's authority to pursue the issue.

That leak confirmed the existence of the probe, the report said, which Comey had up to that point refused to do.

Unlike the Flynn case -- in which FBI agents already had access to information about conversations with Russians that they sought from Flynn -- the transcript made plain that the FBI's probe was derailed by McCabe's fib.

“I remember saying to him, ‘Sir, you understand that we’ve put a lot of work into this based on what you told us,’” the investigating agent told McCabe, according to the documents. “I mean, and I even said, 'Long nights and weekends working on this trying to find out who amongst your ranks of trusted people would, would do something like that.' And [McCabe] kind of just looked down, kind of nodded and said, ‘Yeah, I’m sorry.’”

The agent said McCabe's lie had caused weeks of investigative "sidetracking" and indicated that criminal liability popped into his mind: “In our business, we stop and say, 'Look, now we’re getting into an area for due process,'” the agent said, per the transcript.

Last year, McCabe sued the FBI and the Justice Department over his March 2018 firing, arguing it was part of Trump's plan to rid the bureau of leaders he perceived as disloyal to him. McCabe argued in his complaint that the two officials responsible for demoting and then firing him -- FBI Director Christopher Wray and then-Attorney General Jeff Sessions -- created a pretext to force him out in accordance with President Trump's wishes.