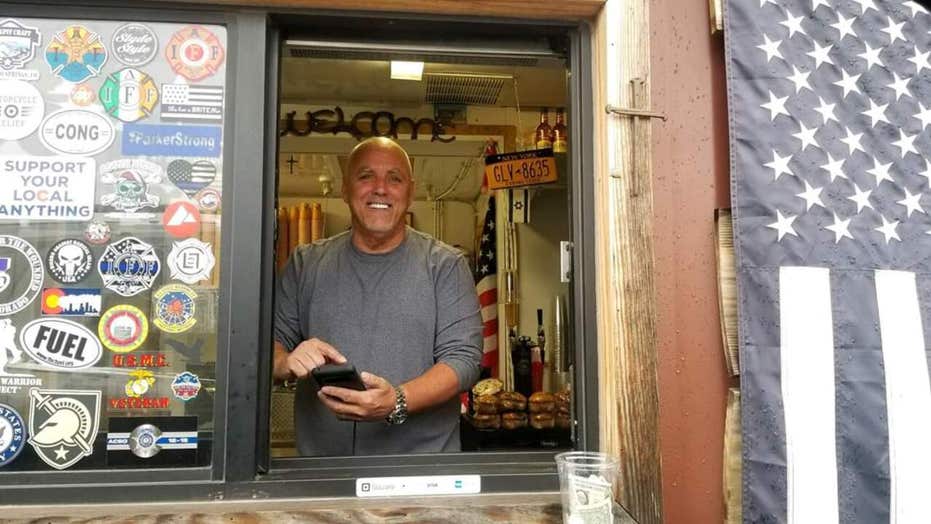 In the face of vandalism, Colorado coffee shop owner shows support for police

After Vandals took down the Thin Blue Line flags that adorned the Coffee Cabin in Parker, Colorado, owner Wesley Crespi decided to hold a rally in support of police across the country. To Crespi’s surprise, over 2,500 people came out in support of the boys in blue.

At 1:57 in the morning, Wesley Crespi got a call that no business owner wants to hear. His Parker, Colo., coffee shop had been vandalized.

Six Thin Blue Line flags that used to fly in front of the Coffee Cabin to show support for police officers were stolen and expletives were written over stickers that adorned the drive-through window.

“When I saw that it hit to the core, you know, and I was like, wow, it really hurt,” Crespi told Fox News.

Crespi said it was his wife who told him to use his anger to motivate him to do something about the incident. So Crespi turned to his local community and put the word out on Facebook for a prayer and peace rally in the face of the vandalism.

PROTESTERS CLASH WITH POLICE AT PRO-POLICE MARCH ORGANISED BY CLERGY

“I said, ‘If you really love our cops, you know, which I know you do. When we all meet at the cabin on Sunday morning at 10 a.m., bring a Thin Blue Line flag, bring an American flag, whatever you want,’” Crespi said. “Bring your family and let's all pray for us, please.”

To Crespi’s surprise, nearly 2,500 people showed up, including the local police chaplain, who led the group in a prayer. Community members also donated hundreds of new Thin Blue Line flags to the Coffee Cabin when they heard about the vandalism.

Although Crespi had a new collection of flags to once again show his support for officers, he decided to keep the graffiti up on his coffee shop window.

“I kept the F word up there [with a Thin Blue Line crossing it out] because I want people to see what it's like when you don't have cops,” said Crespi, who has owned the Coffee Cabin for 14 years.

Coming from a military family and having a brother who is a retired New York City police officer, Crespi said the vandalism felt personal, but he knew he had to stand up for what was right.

“When they did that to my Cabin, I said, enough is enough,” Crespi told Fox News. “If someone wants to come and burn my Cabin down, come burn it down. If somebody wants to shoot me and kill me, come shoot me and kill me. I don't care anymore. But I'll be damned if I'm not going to stand up for police.”