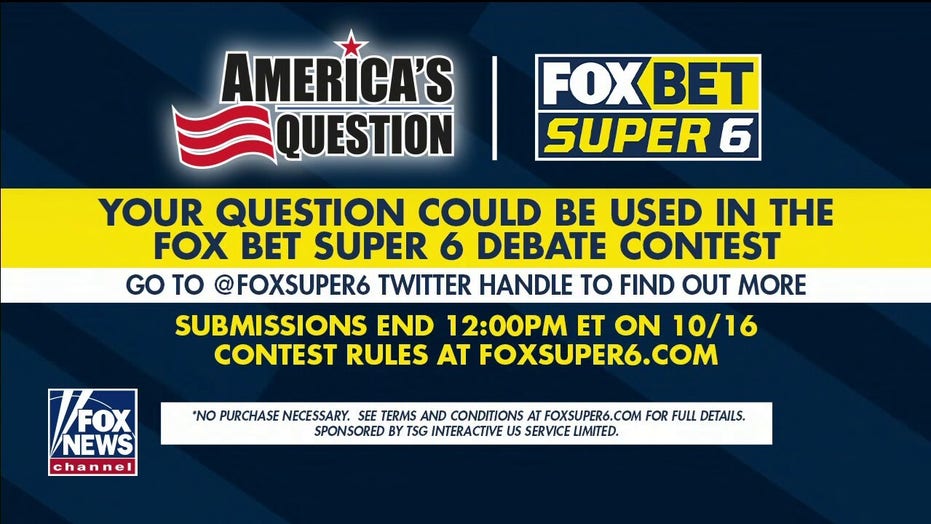 Submit your question for the FOX Bet Super 6 Debate contest

Jesse Watters gives viewers the details on Thursday's 'The Five'

The second and final presidential debate is coming up and FOX Bet Super 6 is inviting Fox News viewers to choose one of the questions in its free Presidential Debate contest on Oct. 22.

Just go to the @FOXSuper6 Twitter handle before noon ET Friday and submit the question you think should be asked in the game.

You can download the Super 6 app for free to see if your question becomes "America’s Question." Then, before the debate kicks off at 9 p.m. ET on Oct. 22, answer six predictive questions and you'll be entered for a free chance to win $50,000 from our friends at FOX BET Super 6.

Fox Bet interim CEO Kip Levin told Fox News prior to the first Trump-Biden debate last month the game is a "fun, lighthearted way for you to engage."

"It’s not gambling because of the free-to-play model," he explained. "Super 6 is risk-free. Customers are not wagering anything -- it’s a free entry to answer some questions, engage in the debate in a new way, and potentially win some money if your predictions were correct."

Fox Bet Super 6 has given away more than $1.4 million since it launched in September 2019, primarily to winners of its weekly NFL contest.

FOX Bet Super 6 is available nationwide with the exception of Washington state.

FOX Bet is an online and mobile sportsbook originally developed through a first-of-its-kind national media and sports wagering partnership in the United States between The Stars Group Inc. and FOX Sports, a unit of Fox Corporation. On May 5, 2020, Flutter Entertainment Plc announced its acquisition of and subsequent merger with The Stars Group.