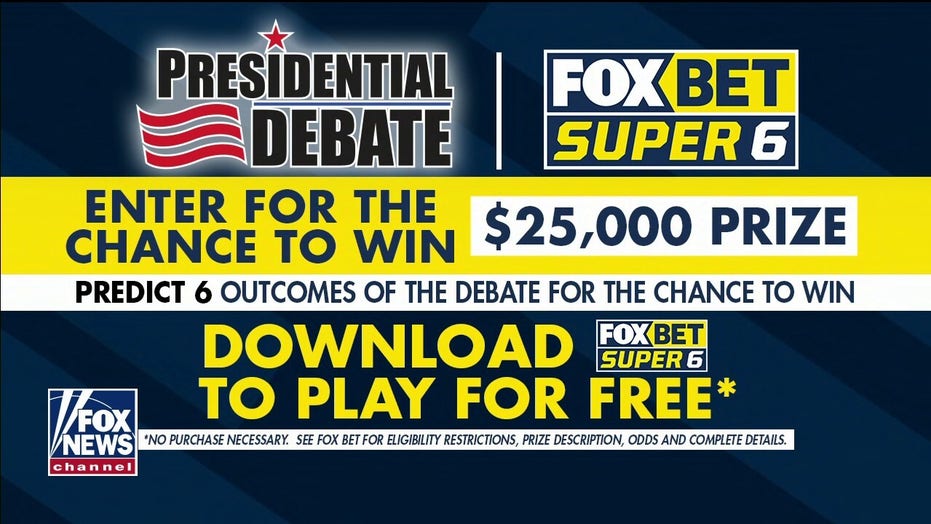 Win some cash during the presidential debate

Media Angle is a column offering perspectives on the media landscape from the newsmakers themselves.

Will President Trump use the nickname “Sleepy Joe” during next week’s presidential debate? Will 2020 Democratic nominee Joe Biden say the word “malarkey” more than he mentions former President Barack Obama?

FOX Bet Super 6, a free-to-play app that typically focuses on sporting events, will allow users to win prizes by making accurate predictions about the first presidential debate between President Trump and Democratic nominee Biden on Tuesday, Sept. 29 in Cleveland.

FOX Bet Super 6 has given away more than $1.4 million dollars since it launched in September 2019, primarily to winners of its weekly NFL contest. But users will now be able to predict things such as whether Trump and Biden will shake hands, if either candidate wears a mask and what nickname the president will call his opponent.

A $25,000 prize pool is guaranteed to be given away by FOX Bet Super 6 for it’s presidential debate game, with the cash being split across the contest's top performers.

Fox News’ Media Angle caught up with FOX Bet interim CEO Kip Levin to find out the details of the presidential debate game, who is eligible to play and why the app strayed from sports.

MEDIA ANGLE: How would you explain the presidential debate game to someone who isn’t familiar with FOX Bet Super 6?
Levin: It’s a fun, lighthearted way for you to engage with the upcoming presidential debate. Players provide answers to six questions about occurrences and phrases that are likely to come up during this first debate on Sept 29. Prizes will be awarded for players that are most successful answering the six questions.

MA: What made you stray from sports and design a contest based on the debate?
Levin: We are continuously looking for new ways to further engage our customers -- 1.4 million downloads since we launched last year -- and offer them fun, unique experiences around live events. The FOX Bet Super 6 app which reaches a national audience was a perfect vehicle for stretching beyond the sports pages and into a live event that will draw a massive audience.

MA: Why can people play even if they live in states where online gambling is prohibited?
Levin: It’s not gambling because of the free-to-play model. Super 6 is risk-free. Customers are not wagering anything -- it’s a free entry to answer some questions, engage in the debate in a new way, and potentially win some money if your predictions were correct.

TRUMP ON PREPARING FOR FIRST DEBATE: 'I DON'T KNOW WHICH JOE BIDEN IS GOING TO SHOW UP'

MA: Many people feel this is the most important election of our lifetime. How can the FOX Bet Super 6 help attract viewers who normally wouldn’t be interested in watching the critical debate?
Levin: If our Super 6 contest gets viewers who weren’t intending to watch the debate to tune in, that’s great! But with all that has gone on in 2020, I do think most sports enthusiasts who we normally appeal to will be watching this presidential debate.

MA: How would you handle criticism from people who might think the presidential debates are serious events that shouldn’t have games based on it?
Levin: All eyes should be on this presidential debate and we encourage all Americans to tune in. Our game aims to be an entertaining way for viewers to take in the debate, test their knowledge of the most important issues that will be discussed and have some fun along the way.

MA: What other games does FOX Bet Super 6 currently offer?
Levin: Our Super 6 game on Sundays during the NFL season is by far the most popular. In addition, we are currently offering a Thursday Night Football Super 6 contest and one for MLB as well. Our Super 6 team is always looking for new creative approaches across all sports and events to give customers a new way to tune in and stay engaged!

MA: What other non-sports events will FOX Bet get involved with down the road?
Levin: Obviously all eyes are on the election and the debates in the lead up to November, so we hope to do further games around politics through then. Beyond that we can see opportunities in the future around reality show contests, award shows, and other high interest events where we can add some additional fun and excitement -- so stay tuned!