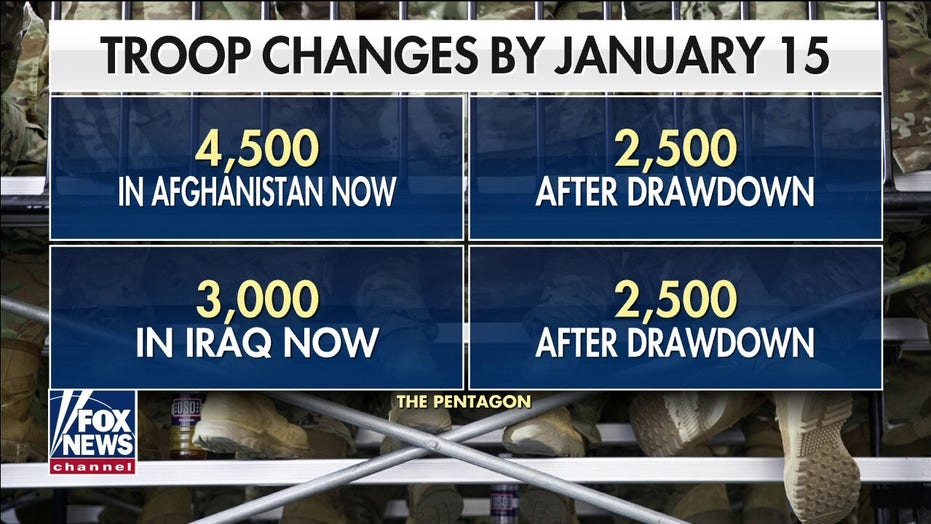 US to withdraw troops from Iraq, Afghanistan

This just in: the Pentagon will lower the number of U.S. troops in Afghanistan and Iraq to about 2,500 in each theater.

The announcement by Acting Secretary of Defense Chris Miller on Tuesday, that the U.S. military will draw down forces by Jan. 15, 2021, is being treated as news, but in fact, the Defense Department has been discussing these moves for months, and this announcement was long expected.

The troop reductions do not reflect a dramatic shift in Trump administration policy. They don’t suggest America is abandoning allies in either place. They are definitely not the culmination of an administration effort to drift into isolationism.

What they do represent is the progression of a logical and persistent effort to prudently employ and right-size American forces around the world to protect America’s global interests and global responsibilities.

US TO DRAW DOWN TROOPS IN AFGHANISTAN, IRAQ BY JAN. 15, PENTAGON SAYS

President Trump has never shown any lack of resolve to lean forward and protect America and its allies against any aggressor.  He went all in to destroy the Caliphate. He had the guts to go after Iran’s global architect of terrorism, Qasam Soleimani, after two previous presidents didn’t.

He issued the strongest statement of support for our allies’ territorial rights and freedom of navigation in the South China Sea. He has done more to support Taiwan in the face of Beijing’s belligerence than any president in recent memory. And he stood strong with India in its border dispute with China.

Say what you want about this administration, but shying away from protecting America and its allies is definitely not one of its shortfalls.

Further, when President Trump said he wanted to end endless wars, he meant exactly that. He wants to end them, not run away from them.

He has kept troops in places like Syria, Iraq and Afghanistan because there is still work to be done there to safeguard American’s interests.  But to be clear—in none of these places are U.S. troops fighting other people’s wars.  In every case, the U.S. is providing training and assistance, conducting counterterrorism missions or protecting U.S. personnel.

When the U.S. ended large-scale fighting in these theaters, the president recognized that the key to long-term peace and stability was not to be found in leaving masses of American troops sitting on the ground. He has focused on building up partner capacity, so nations like Iraq and Afghanistan can defend themselves.

Trump also focused on regional collective security, so these places can be more stable in the long-term. In the Middle East, the administration’s effort to normalize relations between the Arab countries and Israel is likely to bring far more stability to the region than the Palestinians First approach that had prevailed—and failed—for decades.

In Afghanistan, he created a diplomatic option for a negotiated peace, while continuing to build up the capacity and capability of the Afghan people to determine their own future. Indeed, the Afghan people have made unprecedented advances in providing their own security and growing the country’s economy during Trump’s tenure.

It is also interesting to note that, when the president spoke of ending endless wars, he included war-ravaged countries like Kosovo and Serbia. Of course, these two are not engaged in actual fighting now, but their decades-long stand-off has held the entire Western Balkans back.

Trump recognized that. His administration has invested incredible effort in trying to resolve their differences. And, it doesn’t end there. He planned to take on other intractable conflicts in a second term.

In finishing the job in Afghanistan, the U.S must proceed cautiously from here. The president promised that troop reductions were going to be conditions-based. While American forces continue to withdraw, violence has gone up in recent months. That’s unacceptable.

The administration has to keep sufficient capability in place to protect U.S. forces and assets. As the U.S. continues to support the Afghan people and the Afghan-Taliban negotiations, it must keep the pressure on the Taliban and punish them for further violence.

The reality is that President Trump has tried hard to both protect American interests and be a peacemaker. Many hate his rhetoric and his diplomatic style, but his leadership and statecraft have delivered real advances. Those cannot be easily dismissed.

The U.S. can’t run away from problems. On the other hand, the answer to every problem isn’t just more troops on the ground.

Credit to Trump for working to find the responsible middle ground.