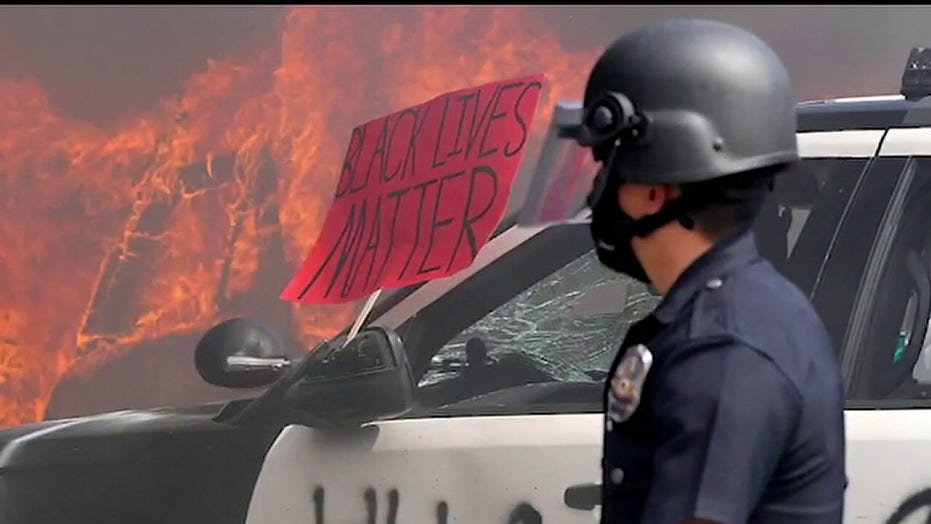 An anonymous police officer sits down with 'Fox &amp; Friends Weekend' co-host Will Cain to tell all.

Over the past few months, we’ve seen liberal policies harm the safety and security of innocent American citizens while protecting and coddling violent anarchists.

We’ve seen nonstop violence and riots in Portland, Ore.,; the cession of entire city blocks to violence and other lawless activity in Seattle, Wash.; looting and record shootings in Chicago, Ill.; and record-setting violence in New York City just to name a few.

Some of our politicians have sold their souls to this organized crime for personal and political gain. Some even refuse to condemn the anarchy and lawlessness and instead sidestep the issue when pressed for a response.

We see this same self-serving idealism as it pertains to border security.

As vice president, Joe Biden refused to enforce U.S. Immigration laws that he himself had a hand in passing as a longtime politician. Recently, and for their own political purposes, far left congresswomen went to the border for photo shoots and to make a spectacle of our agents. They made false allegations against Border Patrol agents, comparing them to the Nazi regime by stating President Trump was allowing the Border Patrol to run concentration camps.

Of course, what the congresswomen failed to inform the American public was that what they were referring to as “concentration camps” were, in fact, constructed and placed in operation during the Obama administration and under Vice President Biden.

Law enforcement overwhelmingly supports President Trump because he supports you, the American public.

The politicization of law enforcement is dangerous to the American public. Unwarranted attacks on our brave officers embolden organized crime and weaken the fabric of this great nation.

The left attacks local and state police, federal officers like Border Patrol and ICE agents – and anyone else who stands for law and order. Their vision is one of anarchy to gain control through fear and violence over those whose views differ from their own. They don't care about the price being paid by so many innocent Americans, mostly in minority neighborhoods, as they cheer on this vicious lawlessness.

The Obama administration’s failure to properly enforce border security laws allowed an unprecedented amount of narcotics to flow illegally across our borders. Hundreds of thousands of our youth lost their lives in our inner cities and suburbs alike. While our children were dying unnecessarily, the cartels were generating unprecedented profits.

Law enforcement overwhelmingly supports President Trump because he supports you, the American public.

Brandon Judd is the president of the National Border Patrol Council (NBPC) which represents all rank-and-file Border Patrol agents nationwide.