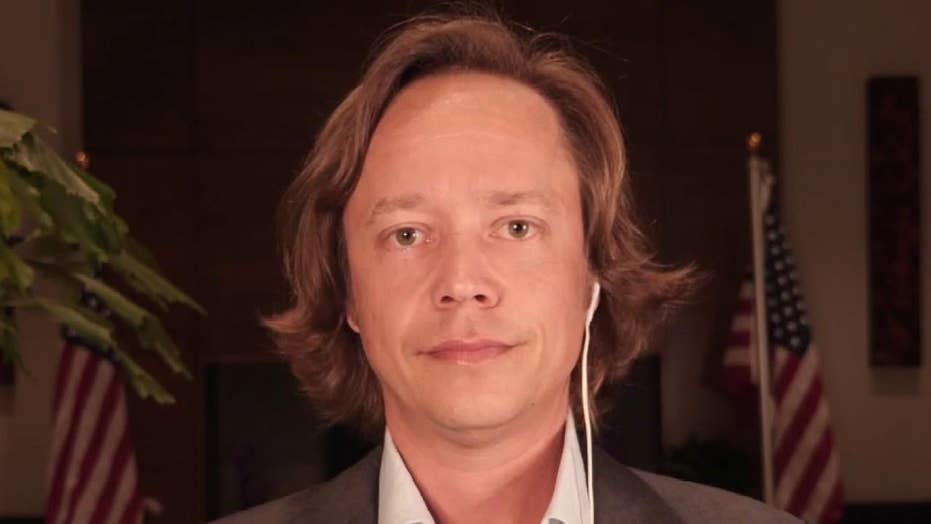 2020 presidential hopeful Brock Pierce: I’m deeply concerned about the state of our nation

EXCLUSIVE: In the freezing wind chill outside the capital building of Cheyenne, Wyoming, on Saturday night, scores of young and old braved the elements in thick coats and Western boots to dance to the Burning Man Festival favorite, a laser and psychedelic-like Mexican musical act known as the Mayan Warrior.

It was the entertainment nightcap for a presidential convention — and certainly no ordinary political convention. Instead, the sleepy city of 63,000 played host to the first-ever Independent National Convention (INC), an event brimming with presidential candidates and a cast of characters pushing for a viable third-party option for U.S. voters not aligned with the red or the blue.

Ahead of the Mayan Warrior performance at the Independent National Convention. (Fox News)

"This is about getting our act together; we are too splintered. There is a Grassroots party, a Libertarian party, a Green Party. We have all these parties, and we all hate the two-party system which is failing to solve all the big problems," Dean Barkley, former independent United States Senator for Minnesota, and the founder and chair of the Minnesota Reform Party, told Fox News. "If we can get all these diverse units together, then it becomes a force."

The Independent National Convention's objective was sowing enough seeds to be able to put forth the most suitable presidential candidate in years to come. (FOX NEWS)

At the invitation of the nonprofit Free & Equal Elections Foundation and the newly formed Independent National Union (INU), some eight presidential independents staged their own debates, forums, and resolution discussions with the long-term goal of bringing "independents together to coordinate a critical path forward that leads to more independents governing, independently."

The INC was not a nominating convention. Rather, its future objective ‒ and that of the novel INU ‒ lies in sowing enough seeds to be able to put forth the most suitable presidential candidate in years to come. While hardly in a position to give either Donald Trump or Joe Biden a feasible run at the polls next week, 2020 has brought with it some 33 third-party candidates with varying ballot access, state by state.

Probably the most known name on the ticket – who was urged to attend the INC to join the debate but ultimately did not show up – is rapper Kanye West, who founded his own "Birthday Party" and threw his hat in the ring on July 4.

Historically, third-party candidacy has been viewed as having an impact not because a candidate stands to win but because it takes potentially pivotal votes away from the two main parties, in an act termed "a spoiler."

"Some of us still remember the elections in 1992 when Ross Perot ran as an independent and obtained over 18 million votes, basically draining George Bush's (Sr.) base," recalled Carsten Pfau, economist and founder of the Agri Terra Group. "If Ross Perot had not run, Bill Clinton most likely would not have become president, and we would never have experienced the subprime financial crisis in 2008."

Chris Haynes, associate professor of political science and national security at the University of New Haven, said in 2000 independent Green Party nominee Ralph Nader "potentially swung the election in favor of George W. Bush in 2000, having received more votes than the difference in the contested state of Florida."

Earlier this year, Starbucks CEO Howard Schultz mulled such a bid for the White House – igniting pushback and concern from Democrats that someone of his stature and wealth could drive votes from their base. In the end, he chose not to take the plunge.

"We won't know until after the election what kind of impact (independents) have had, but the one thing that is always brought up is the concept of a spoiler," Pierce said. "But it is flawed thinking to demand that everybody vote red or blue. The beauty of this system is that our right to vote entitles us with the ability to vote for whoever we want, and the idea that we have a choice should not be forgotten."

Democratic and Republican nominees are etched onto the ballot automatically, but independents have to jump through an array of regulatory hoops in all 50 states – from fluctuating signature mandates to filing early deadlines – and often have to put up hundreds of thousands if not millions of dollars to keep a campaign afloat.

"The only scenario I could see a third-party candidate winning, much less competing for the U.S. presidency, is if a universally known and beloved figure with access to massive resources begun a campaign at least two to three years before the election to build an organization, establish name recognition, gain endorsements, and build momentum," Haynes said.

Barkley concurred that in order for a third-party to really make any inroads, they have to start with either fame and/or a lot of financial resources.

"It is that simple, that is needed and then getting on the debate stage is the second struggle. There are a lot of barriers, but they can all be solved," Barkley said. "In this country, money or fame is the great equalizer. I used money and fame with a retired professional wrestler."

Barkley is referring to his role as chairman of Jesse Ventura's triumphant gubernatorial campaign in 1998, of which Ventura went on to become the 38th governor of Minnesota. He claimed they were outspent by their competition 20 to 1, but still went on to win in large part due to Ventura's notoriety from Hollywood and the ring.

And it seems Ventura himself hasn't given up the possibility of an independent presidential quest.

"Jesse was almost going to run in this cycle as the Green Party candidate, but they couldn't get their act together," Barkley noted. "But he hasn't given up the ghost yet."

For the likes of Pierce, its campaign cost well into the millions — a large team of veteran strategists, management, planners coupled with a decked-out tour bus, media buys, permits, events, material, and transportation spanning a different state almost every other day since July.

However, he asserts that it all comes down to propelling a long-term vision of unification and starting what he hopes to be a new "movement" that won't end on Nov. 3.

"One of the reasons China is so successful is because it has long-term plans for the country, not just to the next reelection campaign," Pierce continued. "Campaigns are like a startup; you have to build something from nothing."

It has been done — but a long time ago. Founding Father George Washington – averse to the notion of political pigeonholing – was unanimously elected an independent in 1789, but federal inroads have since faltered.

Yet on state levels, independent triumphs are more attainable. Alaska, Illinois, Maine, Minnesota, Rhode Island and Oregon have all, at some point, chosen an independent candidate as governor.

Despite the hurdles, those dedicated to the mission insist that this is merely the beginning — and won't stop until the many Americans who don't identify with either main party have a chance to really make their nonpartisan vote count.

Brittany Kaiser, a co-host of the INC, data activist and former business development director for the now-defunct Cambridge Analytica – which fell apart after information emerged concerning its misuse of Facebook data may have swayed the 2016 U.S. presidential election – stressed that she has worked on three Democrat and three Republican campaigns in her life, but has found her home in the nonpartisan hot seat.

"Independents should have a voice, especially at a time when a lot of Americans have said they aren't interested in the two main choices," Kaiser said. "I know Joe from the 07/08 Obama campaign, and he was great — then."

The data expert also warned that Americans should take much of the polling out there with a grain of salt — underscoring that the vast majority only take a few hundred, or a few thousand responses, are attempting to model it as a sample of the entire country.

"It just isn't scientifically valid. When I was at Cambridge, we were really the ones who saw that Donald Trump had a chance of winning in 2016," Kaiser surmised, adding that polling is also deeply problematic when it comes to giving an independent a fair shot. "When pollsters call, they only ask about Trump or Biden. So how can an independent get to 15% and on the debate stage if their name isn't even mentioned?"

But perhaps the most conventional component of a somewhat unconventional independent run – aligned with the traditions of the Republican and Democrat hopefuls – is the tenant for faith to play a prominent role on the campaign trail. Kanye West's running mate, Michelle Tidball, is a Wyoming-based Christian preacher, and his number one campaign issue centers on "restoring prayer in the classroom" along with a pro-life platform.

And for Pierce, devotion is the soul of all he stands for.

"Faith is paramount; I would not be doing this otherwise," he added. "I would attribute all my success in life to God, and I will take credit for all the failures."