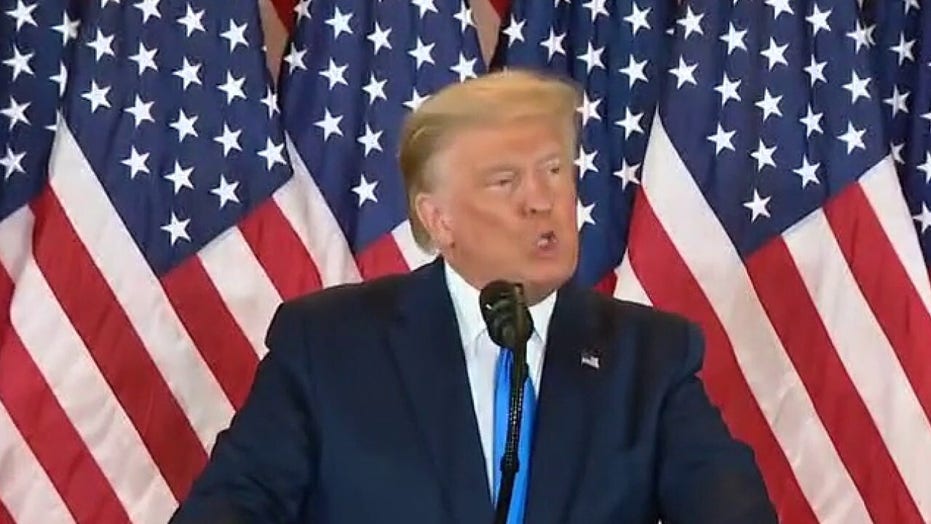 The Trump campaign and GOP leadership on Monday continued to raise allegations of voter fraud and misconduct at the polls last week as it marches forward with its legal challenges despite facing long odds given the Electoral College tally and recent court rulings that found no evidence of widespread vote fraud.

White Press Secretary Kayleigh McEnany, who was joined by Republican National Committee Chair Ronna McDaniel at a hectic press conference in Washington D.C., argued that the presidential election is far from over, despite major networks and news agencies calling  the race for Now President-elect Joe Biden.

“We have only begun the process of obtaining an accurate and fair vote count,” McEnany said. “Our position is clear we want to protect the franchise of the American people.”

She added: “We want maximum transparency…We want every legal vote to be counted.”

McEnany and McDaniel claimed that there were widespread instances of voter fraud and inconsistencies during the vote count last week. They also bemoaned allegations that Republican poll watchers were prohibited from observing the vote counting process.

“We should all be alarmed by this,” McDaniel said before urging members of the media to “interview these people, talk to these people.”

Neither the Trump campaign nor Republican officials, however, have so far released the names of either the election observers or the election officials who they say have reported incidents in key battleground states like Michigan and Pennsylvania.

On Monday, Trump lawyers soldiered on six days after the election, just as personal counsel Rudy Giuliani had promised they would during a surreal weekend press conference outside a landscaping storefront in northeast Philadelphia.

Giuliani denounced the city’s vote count — which fell about 4-1 for Biden, giving the Democrat the win Saturday in both Pennsylvania and the U.S. election — as “extremely troubling.”

Across the country, Republicans have complained about problems with the signatures, secrecy envelopes and postal marks on ballots, the inability of their poll watchers to scrutinize them and the extensions granted for mail-in ballots to arrive.

However, judges have largely rejected the Republican challenges over the past week as the campaign sought to interrupt the vote count as it leaned toward Biden. Trump has yet to concede the election, even as the former vice president claimed victory and got to work on his transition plans.

At the U.S. Supreme Court, 10 Republican state attorneys general filed an amicus brief Monday to support a challenge to Pennsylvania's decision to count mail-in ballots that arrived through Friday. The Pennsylvania Supreme Court had unanimously upheld the three-day extension set by Democratic state officials concerned about Postal Service delays and the COVID-19 pandemic.

Trump’s allies have claimed that Democratic lawmakers in battleground states have used the coronavirus pandemic to manipulate the election process.

“They have taken a global pandemic and turned it into a nationwide electoral epidemic,” McEnany said Monday.

And in Arizona, the Trump campaign asked in a lawsuit filed Saturday for the right to inspect thousands of in-person ballots filled out on Election Day in the Phoenix area, alleging that poll workers had mishandled them.

In Georgia, where Biden has a small lead over Trump but the race remains too early to call, a state election official pledged Monday to investigate any ballot problems they find.

Despite these efforts, Trump aides and allies have acknowledged privately the legal fights would — at best — forestall the inevitable, and some had deep reservations about the president's attempts to undermine faith in the vote. But they said Trump and a core group of allies were aiming to keep his loyal base of supporters on his side even in defeat.

Voter fraud is extremely rare, and when it does happen, people are generally caught and prosecuted and it does not change the outcome of the election. Typically, it involves someone wanting to honor the wishes of a loved one who recently died and either knowingly or not commits a crime by filling out that ballot.

Trump’s own administration has pushed back at the claims of widespread voter fraud and illegal voting though it didn’t mention Trump was the one making the allegations. The Cybersecurity and Infrastructure Security Agency, the federal agency that oversees U.S. election security, also noted local election offices have detection measures that “make it highly difficult to commit fraud through counterfeit ballots.”

Top election officials in the battleground states of Arizona, Georgia, Michigan, Pennsylvania and Nevada - both Republican and Democrat - have all said they see no widespread voting irregularities, no major instances of fraud or illegal activity.

While some Republican lawmakers have accepted that Biden won the election, Senate Majority Leader Mitch McConnell has not congratulated the president-elect on his projected victory and argued that Trump is “100% within his rights” to question election results and consider legal options.

The Republican leader's remarks, his first public comments since Biden was declared the winner of the presidential election, come as Trump's allies on Capitol Hill have been reluctant to congratulate Biden or push the president to accept the outcome.

McConnell said the process will play out and “reach its conclusion.”

“Our institutions are actually built for this,” McConnell said as he opened the Senate. “We have the system in place to consider concerns and President Trump is 100% within his rights to look into allegations of irregularities and weigh his legal options.”