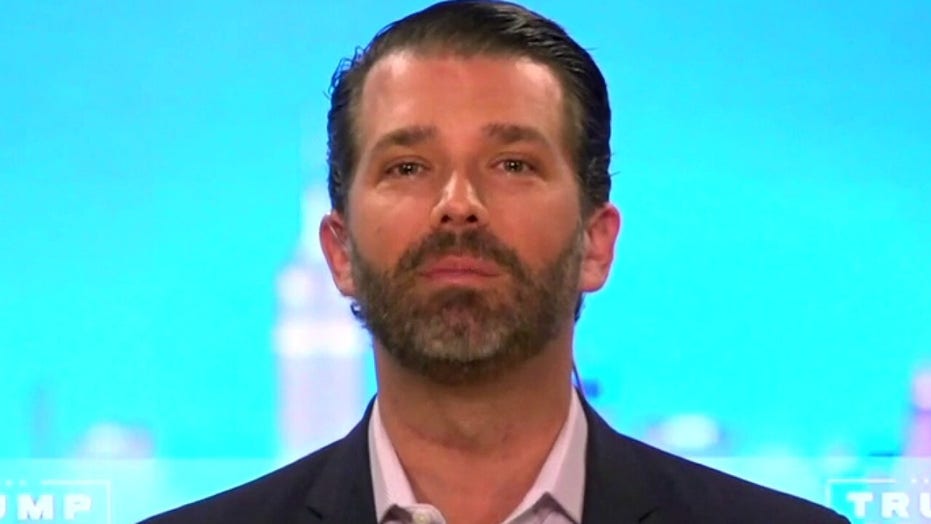 Donald Trump Jr. on declassification of Russia docs: 'What we knew all along'

Donald Trump Jr. slammed the mainstream media and Democrats after President Trump announced Tuesday he authorized the declassification of all documents related to the high-profile Russia investigation.

"Given what I went through because of that for three and a half years, I'm obviously pretty upset," the president's son told "Fox & Friends" Wednesday, reacting to the news.

"It's sort of what we knew was going on all along. It's why I was so belligerent at the time and wasn't going to be quiet and let it go because I knew it was nonsense," the executive vice president of the Trump Organization said.

"But what's really frustrating is that now that we know that this was, again, a set-up," he said, "now that we know all of them knew: the CIA, the upper levels of the FBI, the Obama Administration, Obama, and Biden himself, they all knew, and they let this go on for four years. They let it happen knowing that it was nonsense because it would hurt Donald Trump."

Trump Jr. said it's "scary" that the media doesn't seem to care about the story because it is negative about Obama and "their darling candidate Joe Biden," despite the story grabbing headlines and breaking news over the past several years.

"Now that it's against them, they don't want anything. They are actually outraged that we would want transparency," he said. "They're outraged that the American people should be able to see all of the information and, by the way, the upper levels of the FBI and the CIA are still doing whatever they possibly can to make sure that those documents don't get out.

"They will say well, you know, there is secret stuff in there -- no, it's not secret. It's nonsense. It's that you were all involved and you guys are protecting your failed corrupted bureaucratic institutions rather than the Constitution, which is the pattern we have seen for the last four years and it needs to stop now."