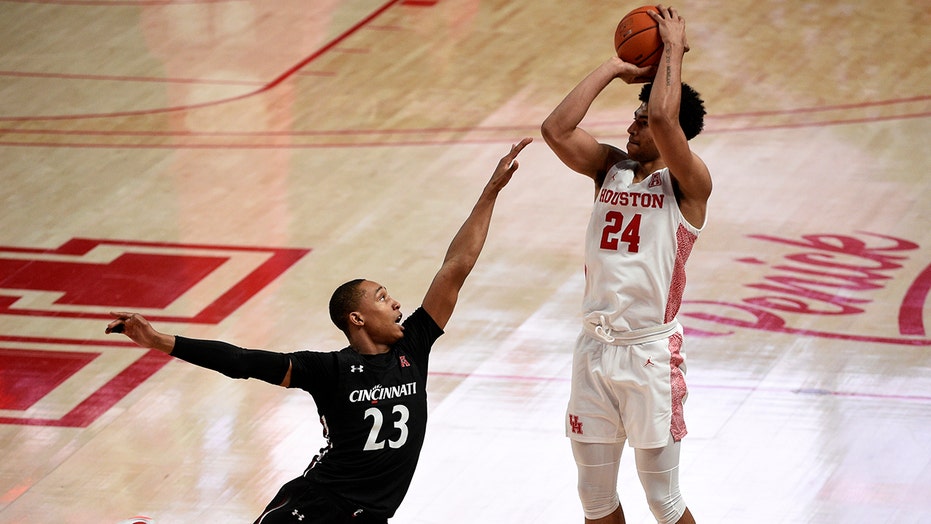 Quentin Grimes had 20 points and eight rebounds, and No. 6 Houston used a big first half to roll past Cincinnati 90-52 on Sunday.

"Coach (Kelvin) Sampson told me and Marcus (Sasser) he wants us to be ultra-aggressive from the tip all game," Grimes said. "He told us we play best with DeJon pushing the pace looking for us and me and Marcus in attack mode. It gets the whole team in the flow."

The Cougars forced Cincinnati into 13 turnovers, which Houston converted into 22 points.

The margin of victory was the largest for either team in the series, besting a 115-78 win by the Bearcats in Dec. 1998. Cincinnati leads the series with Houston 34-6.

Houston entered 2-2 in its previous four games and fell to Wichita State 68-63 on Thursday.

"All respect to (Cincinnati coach) John (Brannen) and his program, but this game was about us," Sampson said. "When you play 25, 30, 40 games, you’re going to have games where you just don’t play good. We know that. ... Tonight, our intensity level and how hard we play, it was good to see us get back to that level."

"Bottom line is when you play a team that’s national championship good — really, really talented that (Sampson)’s built over seven years — you can’t make mistakes," Brannen said. "They took advantage of every one of them. It was an uphill battle pretty much after the eight-minute mark of the first half."

Houston outscored the Bearcats 32-7 over the final 11 minutes of the first half to take a 50-26 lead at the break. Jarreau scored nine points and Mark had eight in the half-ending run.

Cincinnati: The Bearcats played tough for the first eight minutes and held a 19-18 lead behind 6-of-10 shooting but went cold from the floor. ... Cincinnati allowed a season high in points while scoring a season low.

Houston: The Cougars extended their home winning streak to 22 games. ... Houston won the rebounding battle, 47-31, and held a 16-2 advantage in second-chance points. The Cougars also had a 40-16 advantage in points in the paint and 20-6 edge in fast-break points.

Houston has not lost consecutive games since March 10-15, 2017, against UConn and Akron.

"We know that if we lose, we come in the next day, it’s going to be a pretty tough day on the court, in film," Grimes said. "You know when you come into that game you have to be on your Ps and Qs at all times because you don’t want to have another day that happens when you lose."

Cincinnati: Travels to Tulsa on Wednesday.

Houston: Sampson said the Cougars will likely add a game on Thursday. If not, their next game is Feb. 28, at home against South Florida.