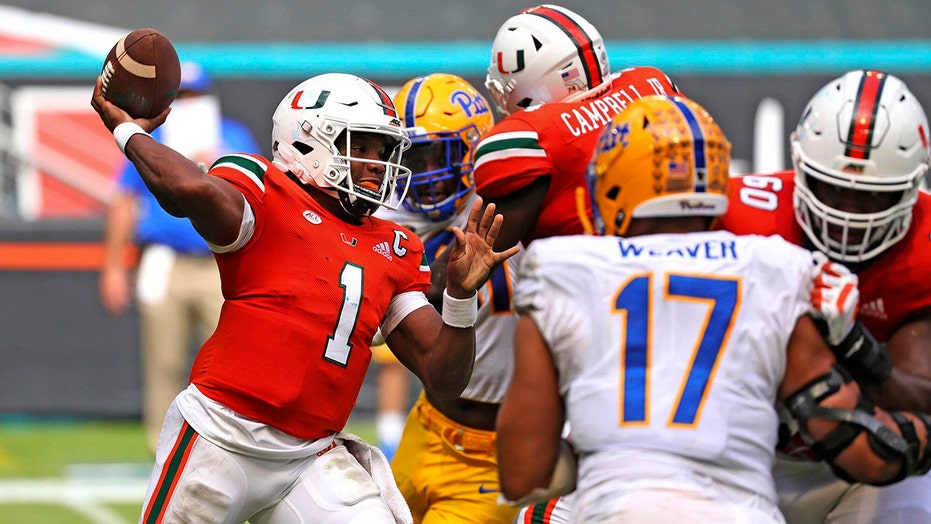 Miami avoided the post-Clemson letdown and now can set its sight on remaining in the conference championship picture.

D’Eriq King threw four touchdowns, including two to Will Mallory, to lead the Hurricanes (4-1, 3-1 Atlantic Coast Conference), who never trailed in this one.

“We were disappointed and a little bit angry coming off last week,” Miami coach Manny Diaz said. “That’s a difficult situation — you have a noon kickoff, not a super juicy environment because of the restrictions that we have and against a team with a sense of desperation. For those guys to go out there and know that it was not going to be an easy game regardless of your mental mindset says a lot about the leadership of our football team.”

The Panthers (3-3, 2-3) lost their third consecutive game and were without senior quarterback Kenny Pickett, who suffered an ankle injury against Boston College last week. Entering Saturday's game, Pickett led the nation with 1,389 passing yards but didn’t travel with the team to South Florida.

“You didn’t know what to expect; I thought he played solid,” Pitt coach Pat Narduzzi said of Yellen. “I thought he put the ball in people’s hands to make plays. We’ve got to help him out.”

But Miami regained its double-digit advantage on King’s 45-yard touchdown pass to Mallory.

“As far as today, I’m super proud of those guys,” King said. “We put Clemson behind us and tried to put a W anyway we could. We knew we had a tough challenge in back-to-back weeks."

Kessman’s fourth conversion with 31 seconds remaining in the third quarter made it 28-19 before Jose Borregales gave Miami another double-digit cushion with his 37-yard field goal late in the fourth quarter. The drive drained 7:11 off the clock and prevented the Panthers from making a late comeback.

The Hurricanes struck first on King’s 35-yard touchdown pass to Cam’Ron Harris midway through the first quarter. King retreated from an attempted draw and found an open Harris down the middle.

King connected with Mallory on a 6-yard score with 6:44 left in the second quarter for a 14-0 lead.

Kessman kicked two field goals late in the second quarter and got the Panthers to within 14-6. Pitt settled for the second field goal after being unable to capitalize on a drive starting at the Miami 12 that was set by Harris Ford’s 25-yard interception return.

King found an open Mike Harley down the right sideline for a 38-yard touchdown pass in Miami’s opening drive of the second half. Harley eluded a Panthers defender before reaching the end zone for his first TD reception of the season.

The Hurricanes erased the frustrations of the loss at Clemson with quick-strike scores and a defense that allowed 22 yards rushing and forced Pitt to settle for field goals on three possessions inside the red zone.

“Red-zone defense is a mentality, to me that’s where it gets into the culture of your defensive room,” Diaz said. “Really proud of them the way they went down there and never panicked and made them kick field goals.”

Miami will probably hold steady in the rankings.

With pre-season All-American tight end Brevin Jordan missing the game because of a shoulder injury, Mallory accepted additional responsibilities as his replacement.

“When you got a player like Brevin out for the week, someone’s got to fill those big shoes because he’s a heck of a player,” Mallory said. “Coming in, I hadn’t gotten as many passes this year. I just had to step up."

Miami: Plays its third night home game of the season next Saturday against Virginia.