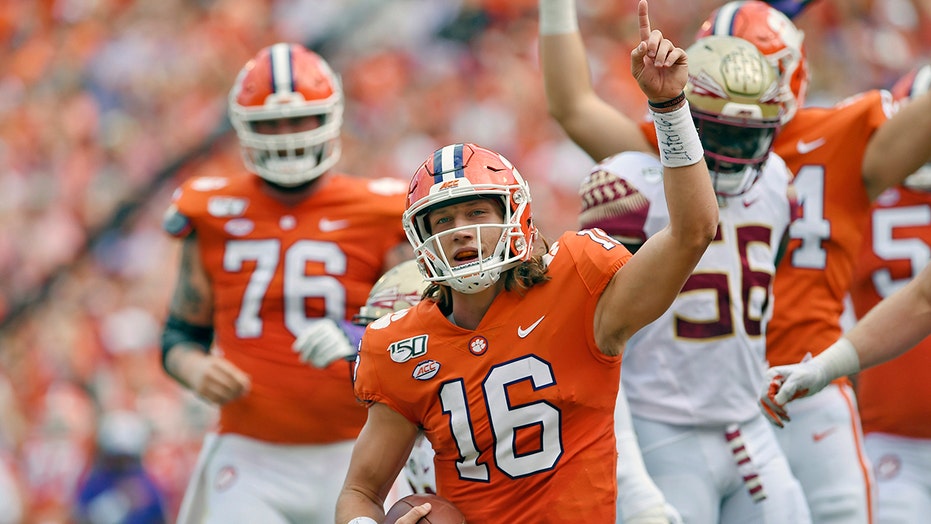 Trevor Lawrence brushed off the first interception he has thrown this season and passed for a career-high 404 yards and five touchdowns as No. 1 Clemson overwhelmed Georgia Tech 73-7 on Saturday.

Lawrence completed 24 of 33 passes. All of his scoring passes came in the Tigers' dominant first half. Clemson led 52-7 at halftime and kept adding to the lead in the second half, even with second- and third- (and maybe fourth-) stringers on the field.

Lawrence left the game after Clemson's first possession of the second half.

The second-longest streak of passes without an interception in ACC history ended late in the first quarter when Zamari Walton picked off a pass by Lawrence.

It was Lawrence’s first interception since Oct. 19, 2019 at Louisville. North Carolina State’s Russell Wilson set the ACC record with 379 consecutive passes without an interception from 2018-19.

Otherwise it was one of the best games of Lawrence's career. His previous high was four touchdown passes. He passed that mark in the first half, connecting for two scoring passes with Amari Rodgers.

Lawrence answered with an 83-yard scoring pass to Rodgers on the Tigers' next play, and the Yellow Jackets never recovered. The long pass sparked a string of 66 consecutive points scored by the Tigers.

Rodgers had six catches for 161 yards. He also had a 16-yard TD reception.

The Tigers took advantage of a Georgia Tech defense which was focused on stopping Travis Etienne and the Clemson running game. Etienne had a 2-yard scoring run in the second quarter to become Clemson's all-time scoring leader, but most of the scoring was provided by Lawrence's passes.

Etienne had 11 carries for 44 yards and a touchdown and two catches for 29 yards.

Clemson: The Tigers showed impressive poise in avoiding a letdown following last week's much-anticipated win over Miami. Clemson made an impressive case for its No. 1 ranking with the dominant win. Lawrence played like he was compiling a highlight film for his Heisman Trophy campaign.

Georgia Tech: In a game viewed as a measuring stick for the second year of coach Geoff Collins' program, the results were discouraging. Clemson beat the Yellow Jackets 52-14 to open last season in Collins' debut, and this loss was more lopsided. After protecting the ball in last week's win over Louisville, the Yellow Jackets had three turnovers. Sims completed 6 of 13 passes for 81 yards with one touchdown and one interception.

After having all three of its field-goal attempts blocked in last week’s win over then-No. 7 Miami, Clemson fixed the problem on B.T. Potter’s 30-yard field goal in the first quarter.