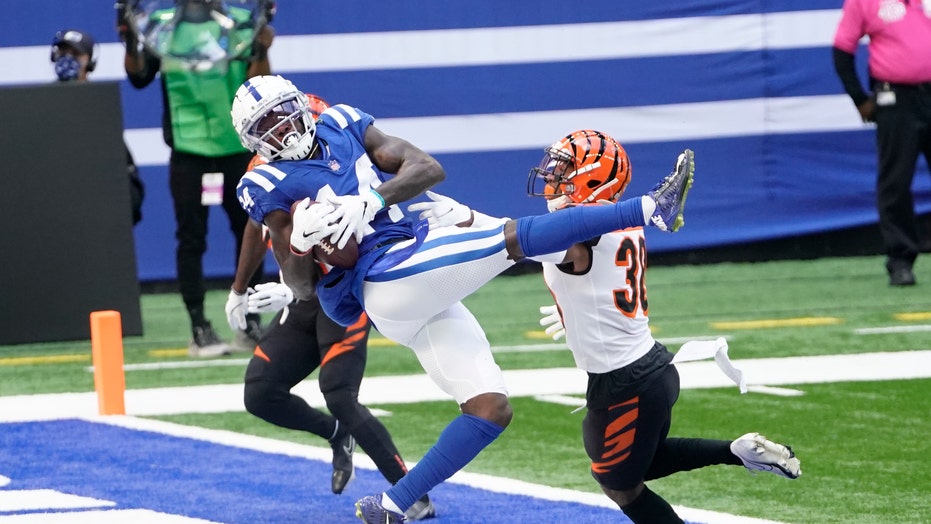 He went back to work and joined MVP quarterbacks Bert Jones and Peyton Manning in the Colts' record book.

Rivers responded by throwing three touchdown passes, including the 14-yard go-ahead scoring throw to Jack Doyle on the first play of the fourth quarter, leading the Colts to a 31-27 victory over the Cincinnati Bengals to match the greatest regular-season comeback in franchise history.

“I wasn’t feeling any panic," Rivers said. “We'd only run about eight snaps, I think, offensively. So personally what I drew on was, it was early in the game and I drew on 2006 at Cincinnati, my first year starting. We were down 28-7 at the half and came came back and won kind of similarly.”

Fourteen years later, Rivers found a way to do it again — marking the fifth time in Colts history and the first on the franchise's home turf. Indy's only larger comeback was a 28-point deficit against Kansas City in the 2013 playoffs.

The last time Indianapolis rallied from such a deep hole was 2003 at Tampa Bay. Indy missed a field goal to force overtime, but the Bucs were called for leaping and then MIke Vanderjagt made the kick. The Colts won in OT.

Rivers also has done it twice against the Bengals (1-4-1), who have only blown leads of 21 or more five times, including a team record 24-point lead in 1979 against the Houston Oilers.

“It’s a tough one to swallow for sure," Bengals coach Zac Taylor said. “Then again, we didn’t earn it. You’ve got to challenge the team. Everybody could have done one more thing.”

Rivers was sensational: 29 of 44 with 371 yards and one interception. Once he got rolling, the Colts (4-2) kept scoring.

Things sure didn’t start well for Indianapolis. The Bengals converted Doyle’s fumble on the second play of the game into a 2-yard touchdown run from Giovanni Bernard. After forcing a punt, Burrow plunged in for a 2-yard score on fourth down to make it 14-0. And when Joe Mixon added a 7-yard TD run on the first play of the second quarter the Bengals looked like they might run away.

Instead, tight end Trey Burton took a direct snap and scored on a 1-yard run. After Cincinnati added a 47-yard field goal, Rivers threw TD passes of 10 yards to Burton and 17 yards to Zach Pascal with 15 seconds left in the half to make it 24-21. .

Then after another Bengals field goal, Rivers hooked up with Doyle.

Cincinnati could have retaken the lead with a 48-yard field goal with 8:02 to play, but Randy Bullock hit the right upright.

Rodrigo Sanchez made a 40-yard field goal and Julian Blackmon picked off Joe Burrow with 39 seconds left to seal it.

The on-time kickoff came as a relief in Indianapolis after Friday morning's scare.

Four people inside the Colts' facility initially tested positive for COVID-19. Second tests performed on the four proved to be false positives.

But for a few uncertain hours, coach Frank Reich, his staff and players scrambled to concoct backup plans in case league officials needed to move the game. The Bengals changed nothing Friday, going about business as usual.

Bengals: Burrow was 25 of 39 with 313 yards and one interception. ... Bernard extended his league-high streak of consecutive carries without a fumble to 764, dating to 2013. ... A.J. Green had five catches for 54 yards after being shut out last week at Baltimore. ... Rookie receiver Tee Higgins had six receptions for a season-high 125 yards. ... Mixon rushed 18 times for 54 yards and one score.

Colts: Rivers started his 230th consecutive game, breaking a tie with Bruce Matthews for No. 4 in league history. ... Marcus Johnson caught five passes for a career-high 125 yards. It's the second 100-yard game of his career. ... Jonathan Taylor had 12 carries for 60 yards and four receptions for 55 yards. ... Burton had four receptions for 58 yards.

Bengals: look for a season split when they host Cleveland next Sunday.