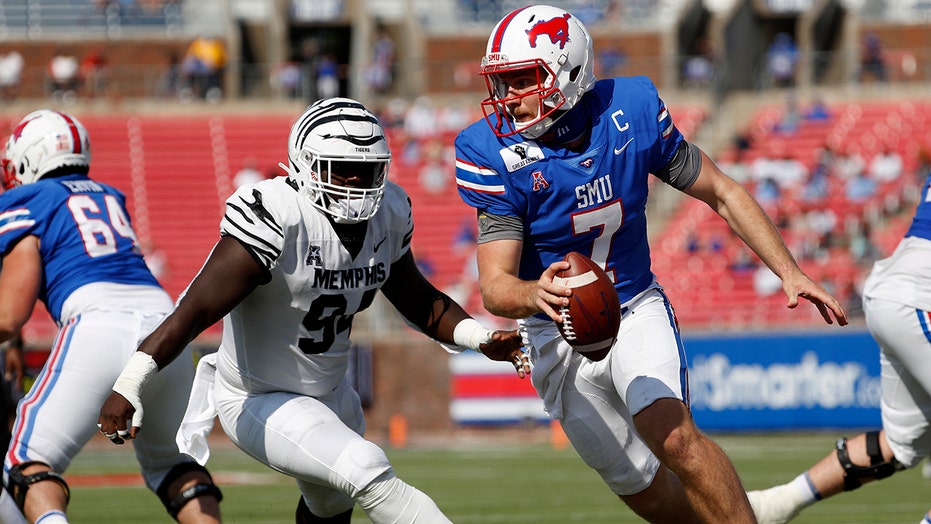 Chris Naggar kicked a 43-yard field goal with nine seconds left and SMU beat No. 25 Memphis 30-27 on Saturday, after the Mustangs blew an early three-touchdown lead against a team playing its first game in four weeks.

Memphis (1-1, 0-1 American Athletic Conference), which because of COVID-19 issues hadn’t played since winning its opener Sept. 5, was driving for a potential go-ahead score when Brady White was sacked and fumbled with 1:25 left. That set up the final drive for SMU (4-0, 1-0), which never trailed.

“I knew I was going to have to play a big part in the game,” said Naggar, who also had field goals of 27 and 25 yards. “I was already in the right mindset. I knew it was going to come down to something like that.”

Shane Buechele was 32-of-45 passing for 474 yards and three touchdowns. That included catch-and-run scores of 70 and 85 yards to Reggie Roberson before the star receiver exited the game with an apparent left knee injury late in the third quarter. Roberson finished with five catches for 243 yards.

White was 29 of 42 for 380 yards, three touchdowns and two interceptions. Damonte Coxie had eight catches for 169 yards.

Memphis last played a month ago against Arkansas State. The Tigers didn’t play their next two scheduled games and had an 11-day gap without practicing because of positive COVID-19 tests in the program.

SMU had a 24-3 lead after Roberson’s 85-yard score early in the second quarter. Buechele stepped up in the pocket and hit Roberson near the 25, where the receiver made a defender miss and then took off down the sideline.

“Obviously disappointed, or mad, sad with the loss. I was not pleased with the way the game started in any phases,” Memphis coach Ryan Silverfield said. “No excuses. We’re not going to use rust or anything of that nature.”

After the teams traded turnovers in the final minute of the first half, Memphis was within 24-20 on Riley Patterson’s 56-yard field goal as time expired. The Tigers got even at 27 on White’s 5-yard TD pass to Tahj Washington late in the third quarter.

Memphis was barely ranked when the Top 25 came out last week, only one poll point ahead of the first team left out. The Tigers will fall out Sunday. SMU has been getting votes, but likely needs more than a win over Memphis to be ranked. The Mustangs’ other wins are against Texas State, North Texas and FCS team Stephen F. Austin.

Memphis: A tough loss for the defending AAC champion Tigers, who were obviously rusty coming back and likely affected by conditioning late. White and the offense can still pile up the yards, with 585 against SMU.

SMU: While the Mustangs are 4-0 in consecutive seasons for the first time since 1983-84, there are concerns because of the injuries to their top receiver and starting tailback. Roberson didn’t play again last year after a right foot injury in the eighth game of the season. Sophomore TJ McDaniel suffered a gruesome lower left leg injury on the first play of the game. He had to taken off the field on a cart.

Memphis: After waiting so long to play, the Tigers now have a scheduled open date before hosting No. 11 UCF on Oct. 17.

SMU: A week off before playing at Tulane on Oct. 16.