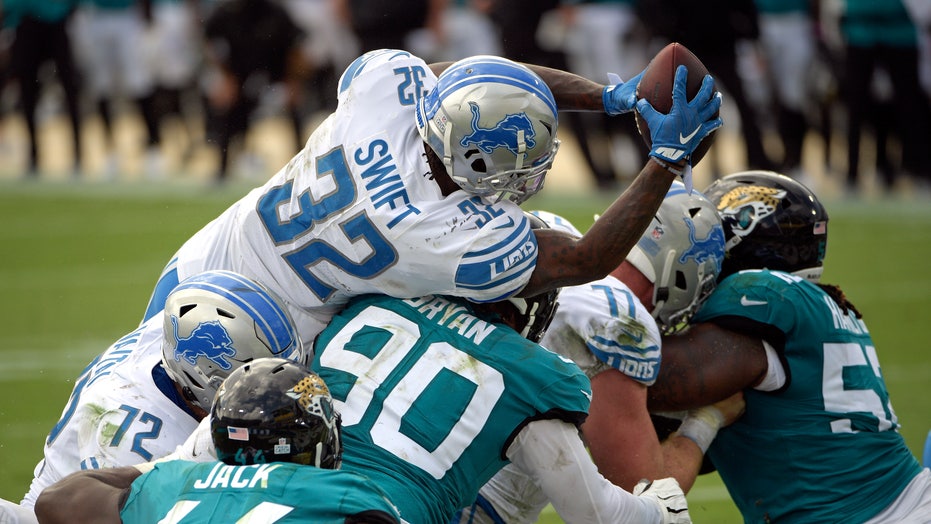 An elusive touchdown pass, a breakout performance, a defensive rebound and a reprieve for the head coach.

This was a victory the Detroit Lions probably needed more than they would admit. It might even serve as a turning point for the season.

Rookie D’Andre Swift ran for a career-high 116 yards and two touchdowns, Matthew Stafford got a TD pass against the only team he hadn’t thrown one against in 12 NFL seasons and the Lions hammered the hapless Jacksonville Jaguars 34-16 on Sunday.

“I thought our guys handled the last two weeks really well, ignored everything and just went out and played and played aggressive,” said embattled Lions coach Matt Patricia, who won for just the third time in his last 18 games.

Detroit (2-3) made this one look easy, somewhat surprising considering the Lions had lost six straight in which they led by double digits. They've already done it three times this season, collapsing in losses to Chicago, Green Bay and New Orleans.

It surely helped that this one came against reeling Jacksonville (1-5), which has now lost five straight and allowed at least 30 points in each. It’s the first time in franchise history the Jaguars have done that, seemingly putting the jobs of coach Doug Marrone and defensive coordinator Todd Wash in more jeopardy.

“I’m not going to be one of those guys to say that’s not something that can happen," Marrone said. “We see what happens around the league. I acknowledge that.”

Patricia can breathe easy for at least a week after tempering speculation about his future with the franchise.

“Our job is to go out there and play, not to pay attention to all the other stuff going on,” Stafford said. “We don’t live in a bubble — not yet at least. All of that stuff is apparent and around and whatever, but it’s our job to play at a high level.”

Detroit did that after a bye week.

Stafford completed 19 of 31 passes for 223 yards, with an interception on a tipped pass. His 1-yard TD toss to T.J. Hockenson came on fourth down and was his first against Jacksonville, the last team outside of Detroit that Stafford hadn't thrown one against.

Kenny Golladay finished with four receptions for 105 yards, and Swift had an eye-opening performance. The rookie from Georgia showed power, speed and elusiveness while improving to 4-0 at EverBank Field. His Bulldogs have won three straight against rival Florida at the NFL venue.

It was the first time since 2013 that Detroit produced a 100-yard rusher and a 100-yard receiver in the same game.

The Lions set the tone early, becoming the fourth opponent in six games to score a touchdown on their first possession against Jacksonville.

They were even better on the other side of the ball, with the league's worst-ranked run defense stuffing James Robinson and pressuring Gardner Minshew into two turnovers.

Peterson finished with 40 yards on 15 carries.

Jaguars kicker Jon Brown was part of history and a trend. Brown was the team’s fifth different kicker in as many weeks, setting an NFL record. He also hit the right upright on a 31-yard attempt, becoming the fifth different guy to miss a kick for Jacksonville in five straight losses.

Josh Lambo, Brandon Wright, Aldrick Rosas, Stephen Hauschka, and Brown each missed either an extra point or at least one field goal.

“Pretty humid down here," Patricia said. “Pretty humid. We might’ve had more than just two go in for IVs.”

As they’ve done all season, players from Detroit and Jacksonville remained in their locker rooms for the national anthem. The Lions had 30 players lined up along the goal line for the anthem, with seven of them — including Stafford — taking a knee. The Jaguars stayed in the locker room together.

The Lions play next Sunday at Atlanta, which has won four of the last five meetings.

The Jaguars travel across the country to face the Los Angeles Chargers next Sunday. The Chargers have won seven of the last eight meetings, including a 45-10 drubbing last December.