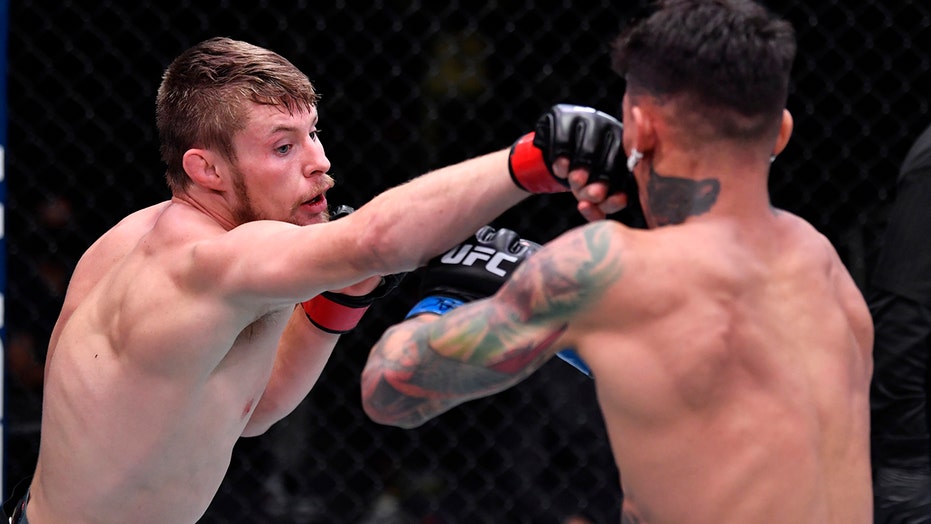 Undefeated featherweight UFC fighter Bryce Mitchell used his post-match interview in Las Vegas on Saturday to slam Arkansas Gov. Asa Hutchinson over the state’s mask mandate, telling him to “go to California” where “the government’s all up in people’s business.”

Mitchell improved his record to 14-0 (5-0 in UFC fights) after a victory over Andre Fili (21-8) at UFC Fight Night but it was his post-match interview that caught the attention of the media.

“This is the only time that I have a platform to say something and I’ve had something on my mind,” he began telling reporters. “It’s affected me and a lot of people that I love and I’m going to take a lot of criticism for saying what I’m about to say but I’m going to say it anyways because I feel it needs to be said.”

Fired up, Mitchell continued with his anti-mask rant -- turning his attention to Hutchinson.

“I just want to tell Asa Hutchinson to have a little bit of a backbone because we did not vote for none of that … I just don’t know who he thinks he is telling us that we have to shut down our businesses or shut our businesses to half capacity without a vote … If he likes shutting down people’s businesses and telling people what to do, he can go to California because they’ll love him over there. That’s what they do over there -- the government’s all up in people’s business over there and we don’t want to live like that and I’m just asking to get our freedoms back … make the masks optional in Arkansas.”

Mitchell again acknowledged that his remarks would likely draw criticism but added that he’s entitled to his opinion as a taxpayer.

“There’s going to be a lot of criticism and a lot of people attacking me for saying that and they’re going to say I’m a dumb MMA fighter and I got no sense sharing my opinion but you know what? I pay my taxes. So you’re going to tell me you can take that money out of my pocket, tens of thousands of dollars out of my pocket that I fought for, and you’re gonna take it out my pocket and then discredit my opinions and say I don’t have an opinion? No, I do have  an opinion and it does matter.”

According to the Arkansas Department of Health, there have been 104,239 total COVID-19 cases and 1,791 deaths. The CDC and World Health Organization recommend wearing masks, along with physical distancing and regular hand washing, to prevent the spread of the virus.