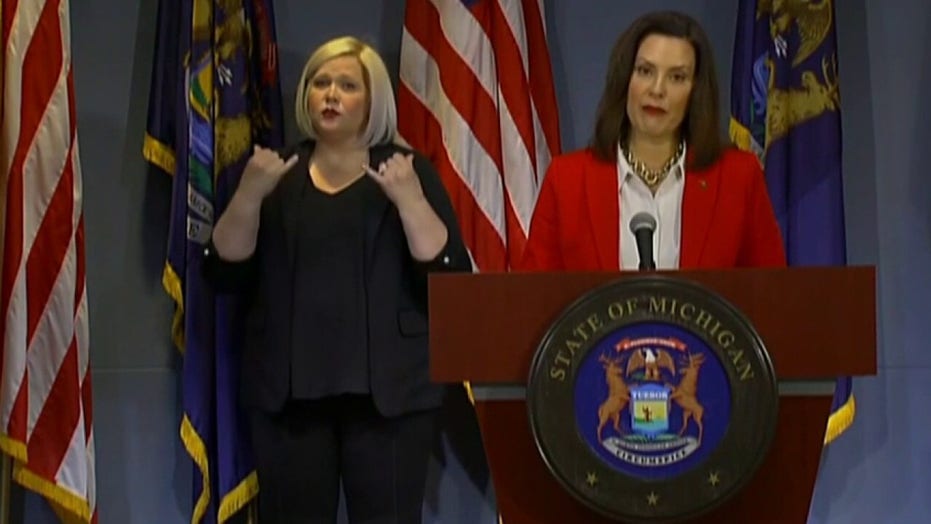 Dozens of protesters, some of whom were armed, gathered Thursday inside Michigan's Capitol building to voice their opposition to Gov. Gretchen Whitmer's stay-at-home order, with tensions high as lawmakers were poised to debate an extension of an emergency and disaster declaration.

Holding American flags and handmade signs, the demonstrators in Lansing first congregated shoulder-to-shoulder outside before demanding to be let inside the building. Some chanted "Let us in," The Detroit News reported.

Dennis Sigler, 66, of Mason, told the newspaper he attended the protest out of respect for others and not because he was worried about the COVID-19.

"I love freedom," he said. "In America, we should be free. Don't let them try to protect us from ourselves."

State Sen. Dayna Polehanki, a Democrat, tweeted a photo of what she described as armed demonstrators yelling above her. She said some of her colleagues were wearing "bullet proof vests" inside the House chamber.

"Directly above me, men with rifles yelling at us. Some of my colleagues who own bullet proof vests are wearing them. I have never appreciated our Sergeants-at-Arms more than today. #mileg," she posted.

Michigan has allowed guns inside the Capitol building but banned protest signs several years ago.

State House lawmakers eventually adjourned their meeting without taking up the extension. However, the House approved a resolution giving Speaker Lee Chatfield, a Republican, the ability to challenge Whitmer's actions legally, MLive reported.

"Members of the Michigan House of Representatives must defend the Legislature’s role as the sole lawmaking body and as a co-equal branch of government in Michigan’s constitutional system," the resolution stated.

Whitmer claimed she had the emergency authority regardless of what state lawmakers did.

Thursday's rally came as some people living in Michigan have continued to demand Whitmer roll back her stay-at-home order in an effort to reopen the state's economy and allow residents to resume daily activities. Last week, she extended the mandate through May 15 but loosened some restrictions beginning Friday.

Residents will be allowed to travel between residences, but it will be "strongly discouraged."

Similar gatherings have sprouted up across the country with participants denouncing stay-at-home orders in their respective states. Many activists have framed their discontent as a civil-rights issue. The orders have mandated that people stay home and that businesses temporarily close, resulting in massive job losses and employee furloughs.

A rally on April 15 called "Operation Gridlock" drew thousands outside Michigan's Capitol, in addition to another gathering outside Whitmer's home.

A protester carrying his rifle at the state Capitol in Lansing, Mich., Thursday. (AP Photo/Paul Sancya)

The governor said following the earlier demonstration that she respected their right to protest but raised concerns about those who ignored social distancing rules.

"We know that this demonstration is going to come at a cost to people's health," she said at the time.

Following Thursday's events, U.S. Rep. Rashida Tlaib, a Democrat from Michigan, voiced her frustration with the treatment of the armed protesters compared to African-Americans.

"Black people get executed by police for just existing, while white people dressed like militia members carrying assault weapons are allowed to threaten State Legislators and staff," she tweeted. "Our gun laws are so broken."