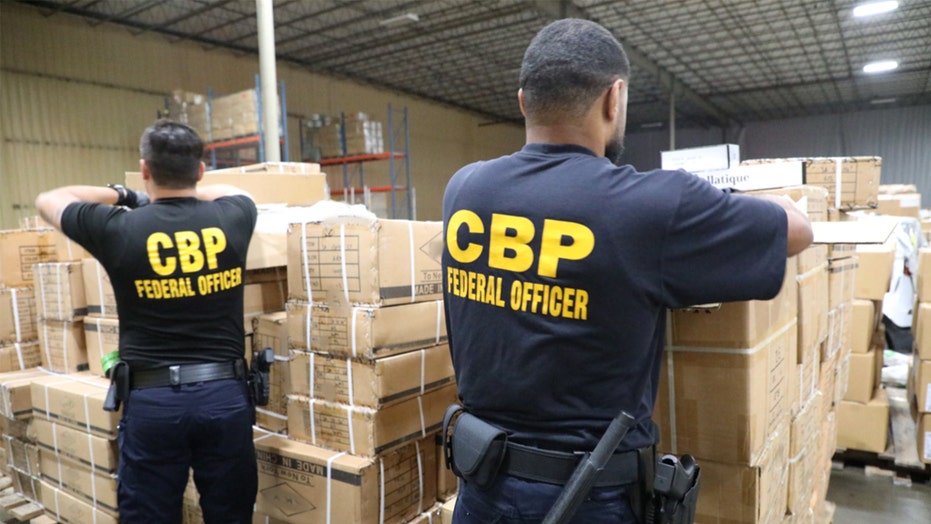 The 2020 Democratic nominee responds to conspiracy theories alleged by the QAnon group.

An officer with U.S. Customs and Border Protection was charged in federal court in New Jersey last week after allegedly threatening the life of his superior, while also appearing to voice beliefs aligned with the QAnon conspiracy theory, Fox News confirmed Wednesday.

Since February 2020, CBP Officer Alberto Almeida allegedly sent numerous messages via text and online platforms containing threats against Edward Fox, the Newark assistant port director for the U.S. Department of Customs and Border Protection, according to a criminal complaint filed in U.S. District Court for the District of New Jersey on Sept. 28.

In one profanity-laced Facebook post published as recently as Sept. 28, Almeida named Fox before threatening to come to Newark airport to use the power of President Trump and the U.S. military to punish him for his alleged involvement in the 9/11 terrorist attacks and a child sex trafficking ring orchestrated by Hillary Clinton, Ghislaine Maxwell and Jeffrey Epstein.

'ANTI-GOVERNMENT' MOM FROM UTAH ALLEGEDLY KIDNAPPED SON BEFORE GOING OFF THE GRID: POLICE

He also named the late John F. Kennedy Jr. and Mossad, the Israeli national intelligence agency. The post concluded with the hashtag “#WWG1WGA,” according to the text quoted in the criminal complaint. That acronym stands for “where we go one, we go all,” a popular slogan among believers in the QAnon conspiracy theory, the Daily Beast reported.

Among various unfounded beliefs, including that there’s a “deep state” within D.C. politics, and high-profile Democrats are running child sex trafficking rings, QAnon supporters have recently alleged that the late JFK Jr., who died in a plane crash in 1999, is still alive, is hiding out in Pennsylvania and will return as Trump’s running mate, the Daily Beast reported.

A CBP spokesperson told Fox News on Wednesday that the allegations against Almeida cited in the criminal complaint filed in New Jersey federal court are being investigated by the CBP Office of Professional Responsibility and “CBP does not comment on ongoing investigations or pending litigation.”

The spokesperson added that CBP “takes all allegations of employee misconduct seriously, but none more so than alleged threats to members of the public or other CBP employees.”

Last week, the U.S. House of Representatives passed a resolution condemning QAnon and the conspiracy theories it promotes. The resolution, which passed 371-18, described QAnon as a “movement promoting a collection of unfounded conspiracy theories that have spread widely on the internet since 2017.”

The theory initially “alleged that prominent Americans are engaged in a secret plot to control the world, while using their power to exploit children, and has expanded to embrace virtually every popular conspiracy theory of the last several decades, from questioning the truth about the Sept. 11 terrorist attacks, to believing in alien landings, to denying the safety of vaccines,” the resolution said.

The FBI assessed with high confidence that “fringe political conspiracy theories,” including QAnon, “very likely motivate some domestic extremists, wholly or in part, to engage in criminal or violent activity.”

QAnon conspiracy theorists have been implicated in a number of crimes that officials said their beliefs inspired, including a man arrested in 2018 for using an armored car to block the bridge over the Hoover Dam, a woman arrested in Colorado in 2019 for plotting an armed raid to kidnap her child, who had been taken from her custody, and a woman arrested in New York with a car full of knives after posting a video accusing Joe Biden of participating in child sex trafficking and threatening to kill him.

QAnon has made its way into the mainstream political arena, as Georgia Republican candidate Marjorie Taylor Greene, who has voiced support for the conspiracy theory, is projected to win the starkly conservative 14th Congressional District. She was endorsed by Trump.

Meanwhile, Facebook on Tuesday announced a new ban against QAnon across all its platforms, saying staff will begin removing posts and deleting pages associated with the conspiracy theory.