The families of three slain U.S. service members and the 13 other victims severely wounded during a mass shooting at Naval Air Station Pensacola in 2019 are suing the Kingdom of Saudi Arabia, alleging that the Saudi government helped facilitate the attack.

The 158-page complaint, filed in federal court in Pensacola on Monday, claims the shooter, Royal Saudi Air Force (RSAF) 2nd Lt. Ahmed Mohammed Al-Shamrani, had fellow Saudi military trainees as "accomplices" to assist him in carrying out the attack.

"In the eyes of the American people, there is no greater betrayal than the realization that a purported ally is, in fact, an enemy," the complaint states.

The lawsuit seeks unspecified compensatory damages for an attack the families say was caused by Saudia Arabia and its "intentional, knowing, reckless, willful and/or grossly negligent" act to send a terrorist operative "Trojan horse" into a U.S. program tied to "billions of dollars in military arms sales from the United States to the Kingdom."

"Little did the American people know that such an arrangement would soon devolve into a horrific, Faustian bargain," the complaint adds. 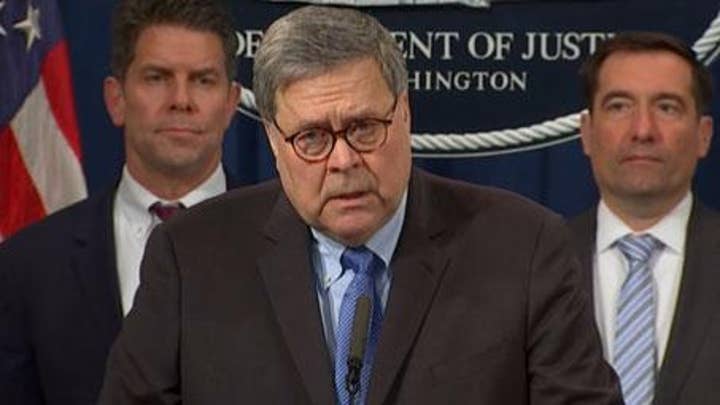 In Janaury 2020, former Attorney General William Barr said the incident was an act of terrorism, with the FBI concluding Al-Shamrani was motivated by "jihadist ideology"

Al-Shamrani, who was killed by responding sheriff’s deputies, worked with Al Qaeda of the Arabian Peninsula (AQAP) for five years to plan the Dec. 6, 2019, attack, U.S. authorities said in May after de-encrypting his phone.

Senior law enforcement officials previously told Fox News the attack lasted 15 minutes and that Al-Shamrani used a Glock 9mm that had five extended magazines. The gun, they added, was purchased legally in Florida.

According to the complaint, Al-Shamrani announced on his social media, which was monitored by the Kingdom of Sauid Arabia and AQAP, on Sept. 11, 2019, that the "countdown had begun," and sent a copy of his will later that month to AQAP, which the victims' families say is "evidence that he communicated directly with the group in the days prior to the attack."

The NAS Pensacola shooter was identified as Mohammed Alshamrani, a 21-year-old 2nd lieutenant in the Royal Saudi Air Force who was a student naval flight officer of Naval Aviation Schools Command. (FBI)

Al-Shamrani then went with a group of Royal Saudi Air Force trainees to visit the 9/11 memorial  in New York City in November 2019, according to the suit, which was not authorized or sanctioned and in violation of U.S. and the Kingdom of Saudi Arabia policy.

"Al-Shamrani and his travel companions failed to notify any senior officer of their plans or their departure from Pensacola to New York, even though Al-Shamrani and the other Saudi officers were aware of the leave protocols," the complaint states. "Despite Saudi Arabia’s surveillance on their cellphones, it did nothing to address this unauthorized trip by its students."

During the visit, the RSAF trainees allegedly paid tribute to the 9/11 hijackers and discussed the plans for the NAS terrorist attack. In addition, on Dec. 5, 2019, the night before the attack, Al-Shamrani allegedly hosted a dinner party for fellow RSAF trainees, in which he screened videos of mass shootings and discussed his plan to commit the NAS terrorist attack the following day.

The complaint notes that one of the RSAD trainees who attended the party called in sick the morning of the shooting and, instead of attending flight training, stood outside the building where the incident occurred and recorded the shooting on his cellphone. Meanwhile, two other RSAF trainees who attended the dinner party allegedly called in sick and watched the attack from a car nearby.

"None of the Royal Saudi Air Force trainees at the scene of the attack reported Al-Shamrani’s behavior nor did they try to stop the NAS terrorist attack," the complaint further alleges. "Because they supported it."

NAS PENSACOLA SHOOTING WAS AN 'ACT OF TERRORISM', BARR SAYS; US TO EXPEL 21 SAUDI NATIONALS IN TRAINING PROGRAM

An investigation into the shooting resulted in the termination of 21 Saudi military trainees from the program who were sent back to Saudi Arabia for possessing "derogatory material."

The complaint notes that 17 of the trainees had social media accounts linked to "anti-American or jihadi content" while 15 of them, including some of the 17 linked to anti-American content, had "other illicit material in their possession."

"That so many Saudi military trainees were, at a minimum, sympathetic to AQAP, and that several more were actually accomplices to the NAS terrorist attack demonstrates the military trainees’ belief that their support and/or sympathy of Salafi jihadism were in furtherance of KSA political and religious goals," the complaint states.

The families claim that Al-Shamrani's "intentional acts were a direct outgrowth of conduct that was within the scope of Al-Shamrani’s employment as an RSAF officer."

"If not for his employment with RSAF, Al-Shamrani would not have had access to his victims, nor the knowledge, training, skill, opportunity and capability required to successfully plan and commit the attack," the lawsuit says.

In addition, they argue that Saudi Arabia "knew or had reason to know that Al-Shamrani was an AQAP associate, and had been in contact with AQAP and held anti-American and Salafi jihadist sentiments."

"Despite this, Saudi Arabia permitted Al-Shamrani to join the RSAF, and harbored 2nd Lt Al-Shamrani within the ranks of the RSAF and in RSAF housing in Saudi Arabia and in the United States," the lawsuit continues. "Saudi Arabia failed to report or disclose 2nd Lt Al-Shamrani’s association with AQAP or his extremist views, and thereby concealed him from detection, enabling him to plan and commit the NAS attack."

Following the attack, King Salman of Saudi Arabia and his son, Crown Prince Mohamed bin Salman, told former President Donald Trump that Saudi Arabia would be involved in "taking care of [the victims’] families and loved ones."

However, the lawsuit argues that, to date, the Kingdom of Saudia Arabia has refused to honor its word or engage with those who were injured and the families of the service members who were killed.

The plaintiffs of the lawsuit include the families of the three victims killed in the NAS Pensacola shooting: Ensign Joshua Kaleb Watson, 23, of Enterprise, Ala.; Airman Mohammed Sameh Haitham, 19, of St. Petersburg, Fla.; and Airman Apprentice Cameron Scott Walters, 21, of Richmond Hill, Ga.

"I will never forget how Cameron was transformed once he graduated just weeks before the attack – so proud of his uniform and ready to serve," Cameron Walters' father, Shane Walters, said in a statement. "The Kingdom of Saudi Arabia let this happen. While the prior White House administration refused to even call me, this one must do its part to stop coddling the Saudi regime and hold them accountable."

"Nothing is going to bring back Mohammed, who was full of life and cared deeply about his family and country," Evelyn Brady, Mohammed Sameh Haitham's mother, added. "But I have to do something to remember him, and holding the Kingdom of Saudi Arabia accountable is part of that."

"We were robbed of such a precious gift, snuffed out in a moment from hatred and bitterness," Joshua Kaleb Watson's father, Benjamin Watson, said. "Our family lost a lot, and our country lost a lot."

In addition, four Navy service members, a Navy civil servant, seven sheriff’s deputies and a Department of Defense police officer wounded in the attack have also joined the suit.