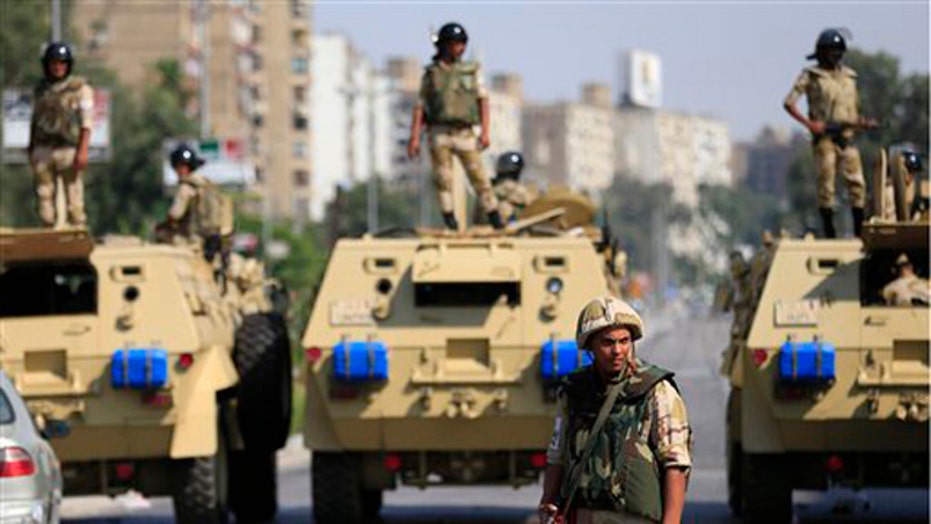 Clashes between supporters and opponents of ousted president Mohammed Morsi reportedly have left 30 people dead across Egypt in a day that saw tens of thousands take to the streets to rally on both sides.

Emergency services official Amr Salama said 12 people died in the Mediterranean coastal city of Alexandria when hundreds of Islamists descended on a rally by opponents of Morsi, opening fire with guns.

In another development,  an Interior Ministry spokesman said the deputy head of  Morsi's Muslim Brotherhood, Khairat el-Shater, considered the most powerful man in the organization, has been arrested.

Spokesman Hani Abdel-Latif said el-Shater and his brother were arrested late Friday at an apartment in eastern Cairo on allegations of inciting violence against protesters in recent days.

There were initially conflicting reports on casualties, but an army spokesman denied Egyptian troops shot at Morsi supporters, saying soldiers fired only blanks and teargas into the crowd.

In Cairo, crowds of Islamists gathered to cross a bridge over the Nile River after nightfall and clashed with Morsi opponents near Tahrir Square and outside the state TV building. TV images showed groups of youths running and fireworks going off near the bridge. One witness reported stone throwing and gunfire.

Fighting between demonstrators and security forces also erupted in cities of southern Egypt, along the Suez Canal and in the Nile Delta as Morsi supporters marched on local government buildings.

In a dramatic appearance -- his first since Morsi's ouster -- the supreme leader of the Muslim Brotherhood defiantly vowed the president would return. "God make Morsi victorious and bring him back to the palace," Mohammed Badie proclaimed from a stage before a crowd of cheering supporters at a Cairo mosque. "We are his soldiers we defend him with our lives."

Badie addressed the military, saying it was a matter of honor for it to abide by its pledge of loyalty to the president, in what appeared to be an attempt to pull it away from its leadership that removed Morsi. "Your leader is Morsi ... Return to the people of Egypt," he said. "Your bullets are not to be fired on your sons and your own people."

On the political front, Egypt’s interim head of state-- appointed after the army ousted Morsi-- dissolved parliament by decree Friday, state television said, according to a Reuters report.

Only the upper house, called the Shura Council, had remained active after military-led authorities dissolved the lower house shortly before Morsi was elected last year. The Shura Council is normally a largely powerless body that does not legislate. But under Morsi’s presidency, it took up lawmaking powers after the lower house was eliminated. The council was overwhelmingly dominated by Morsi's allies.

The military forced Morsi out Wednesday after millions of Egyptians turned out in four days of protests demanding his removal and saying he had squandered his electoral mandate by putting power in the hands of his own Muslim Brotherhood and other, harder-line Islamists. In the 48 hours since, the military has moved against the Brotherhood's senior leadership, putting Morsi under detention and arresting the group's supreme leader and a string of other figures.

In other developments Friday, the African Union suspended Egypt from all its activities and the country’s prosecutor general tendered his resignation in the wake of Morsi’s removal.

Suspension is the African Union’s typical response to any interruption of constitutional rule by a member state. ``As mandated by the relevant AU instruments, the African Union Peace and Security Council decides to suspend the participation of Egypt in AU activities until the restoration of constitutional order,'' Admore Kambudzi, Secretary of the Peace and Security Council, said, according to a Reuters report.

State prosecutors said that Morsi would face an investigation next week into claims that he "insulted the presidency."

Morsi was ousted in what was described by the presidential palace as a "complete military coup." The White House has not labeled Morsi ouster a coup. Doing so would have U.S. aid implications.

Morsi said on his presidential Facebook page that the military's action "presents a military coup and it is unacceptable."

A U.S. official said nonessential diplomats and embassy families had been ordered to leave Egypt amid the unrest. The State Department issued a warning urging U.S. citizens in the country to leave.

The Associated Press and Reuters contributed to this report.