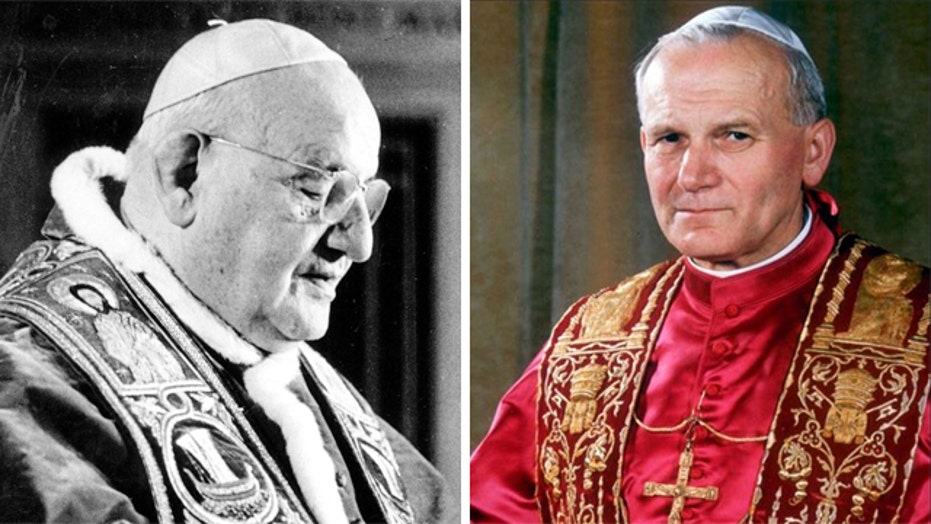 Their impact on the church and the world

On Sunday, Pope Francis makes history yet again.  He makes two Popes saints in a single ceremony--John Paul II and John XXIII, the man who convened the Second Vatican Council in 1959.

A lot has been made of the contrasts between the two Pontiffs.  John the XXIII is known as having been a great liberalizing force for the Catholic Church, and John Paul II a real advocate for adhering to its most conservative tenets.  But many church insiders say actually the two men represent continuity in the Church.  John XXIII made it more accessible to people by replacing Latin masses with vernacular ones, and having priests face the congregations rather than stand with their backs to them.  And John Paul II, with his tireless globetrotting, brought the Church to the people.

And he did it for more than a century.  You can see the impact of that when you assess the crowds on St. Peter's Square who have come from around the world to celebrate these canonizations.

Senior Communications Adviser Greg Burke said, "John Paul II brought the Gospel to the people, so many of the people you see on the streets these days, you talk to them and they have, they might not have met the Pope, but they had a personal experience with him.  They saw him, probably in their hometown, they remember it, they were moved by it."

The Archbishop of Washington, Cardinal Donald Wuerl, knew John Paul II from the time he was Archbishop Wojtyla of Krakow.  They worked together on a committee.  Ultimately it was Pope John Paul II who ordained Wuerl when he became a Bishop.  Wuerl said, "That will always be the high point of my relationship with him.  To be ordained a Bishop by a man today the whole world recognizes as worthy of being called a saint."

Pope John Paul II was the first non-Italian Pope in centuries, and his election, at a time when Poles, along with their East European neighbors were struggling under the yoke of Soviet Communism, deprived of freedom of expression and religion.  He became a symbol of resistance in that part of the world and is credited with helping bring about the fall of the Soviet Union and subsequent regime changes in its satellite states.

Among the groups who embraced John Paul II with the most enthusiasm were young people around the world.  He did a lot to grab their attention and fire up their faith.

Father Thomas Rosica of the Holy See Press Office noted, "What is amazing about this unique relationship of John Paul II and young people is the older he got and the more infirm he became, the more significant he was for young people.  One would think that young people would only look tothose that are agile and beautiful and standing tall, athletes and stars that the world offers us."

And Rosica adds, John Paul did not water down religion for them.

There is a powerful Polish contingent on St. Peter's Square getting ready for the big day.  2000 busloads of Poles were said to have made the journey to Rome overland.

While there is still so much adoration for John Paul II in Poland and outside, there are those who say that the man being officially declared a saint Sunday did not do enough to investigate the child sex abuse scandals that began coming to light in significant numbers during his Pontificate.  How much he knew or tried to know remains a mystery.  Church leadership here point to the fact that the Pope was seriously ailing at the time when it became apparent to all that there was a crisis, and that he did take steps to investigate wrongdoing.  But others say it was too little too late and should have been addressed long before it hit the media.

John XXIII was way ahead of his time.  Much like the current Pope, Francis, he would break out of the Vatican at all times of day or night to go visit people, in prisons, and in hospitals.  He turned around the practice whereby people, especially assistants in the Vatican, had to address the Pope on their knees.  He had a familiar and jovial way about him.  And he was a true advocate for social justice.  Prior to becoming Pope, during the Second World War, he helped many Jews escape.  John XXIII is most remembered for convening Vatican Two, bringing the Church more in line with the times.

Elected Pope when he was well into his seventies, John XXIII was supposed to be a placeholder Pope, but in his five years on the job, he made an enormous impact.  He died of stomach cancer before Vatican Two ended.  But it was his baby.  And is his legacy.

Amy Kellogg currently serves as a Senior Foreign Affairs Correspondent based in Milan, Italy. She joined Fox News Channel (FNC) in 1999 as a Moscow-based correspondent. Follow her on Twitter: @amykelloggfox