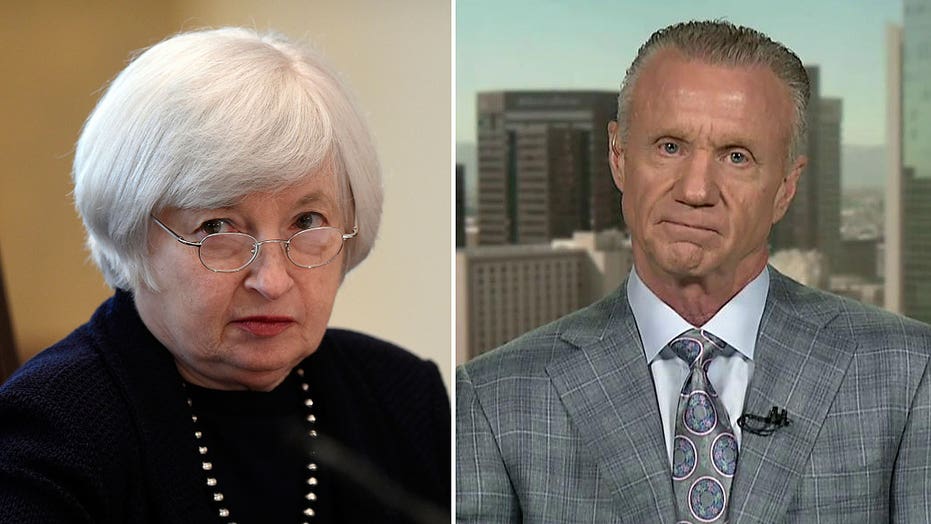 Swiss America's Craig Smith: Janet Yellen is 'over her head'

BEIJING – The Federal Reserve chief's rare comments on China reinforced unease its weakening economy might be headed for a deeper slump. But many experts still think fears of a China crisis are overblown.

The world's second-largest economy has been stubbornly resistant to stimulus following five interest rate cuts since November. Growth in many industries is still decelerating. August exports and auto sales shrank.

On Thursday, U.S. Federal Reserve chairwoman Janet Yellen mentioned China along with inflation after Fed governors put off a long-expected interest rate hike. Such concern is unusual for the Fed, which usually limits its focus to the U.S. economy.

"The question is whether or not there might be a risk of a more abrupt slowdown than most analysts expect," Yellen told reporters.

Much of China's slowdown is self-imposed as part of the ruling Communist Party's effort to replace a worn-out model based on trade and investment with more self-sustaining growth driven by domestic consumption.

Instead of leveling off in what President Xi Jinping has dubbed the "new normal," economic growth has ground steadily lower as steel mills, coal mines and other heavy industry shed jobs, raising the risk of a politically dangerous spike in unemployment.

"We are not expecting a hard landing, but clearly there is no sign that things are improving any time soon," said economist Wei Li at Commonwealth Bank of Australia.

Many economists say fears of a Chinese collapse are not grounded in reality.

The main stock market index, despite a collapse in prices in June, is up 40 percent from its level last year. Auto sales contracted by 3.4 percent in August but Chinese drivers still bought 1.4 million cars, minivans and SUVs.

"GDP is still growing at a 7 percent rate, and that is not too shabby," said Carl B. Weinberg of High Frequency Economics in a report. "People are not being thrown out of work en masse, as they are in southern Europe, by bone-crushing economic contraction."

China also is the biggest trading partner for most of its Asian neighbors and weaker demand for industrial components has hurt suppliers in Japan, South Korea and Southeast Asia.

The impact on the United States, which relies less on trade, is expected to be more modest. Mark Zandi, chief economist at Moody's Analytics, reckons that every 1 percentage point drop in China's economic growth strips 0.2 percentage point off U.S. growth.

Chinese leaders, who say their growth target this year is "about 7 percent," have tried to lower expectations without sparking panic.

Speaking last week, Premier Li Keqiang said the transition will be "painful and treacherous." He tried to downplay the focus on the headline growth rate, saying Beijing will accept a slower expansion so long as it generates enough jobs and incomes rise.

"If there are signs the economy is sliding out of the proper range, we have the ability to deal with the situation," said Li at the World Economic Forum in the eastern city of Dalian.

Chinese leaders' reputation as economic managers took a hit from their panicked, multibillion-dollar intervention to stop a slide in stock prices. That was widely seen as clumsy and ineffective.

On Thursday, Yellen referred to "concerns about the deftness" of Chinese policy.

Beijing still has room to stimulate growth by cutting interest rates or stepping up government spending, according to analysts. But that would be a retreat from the ruling party's campaign to reduce reliance on state-led investment.

The premier and other officials have insisted that longer-term growth has to come not from stimulus but from opening more of the state-dominated economy to entrepreneurs.

A long-awaited reform plan issued Sunday promises to overhaul state companies that control industries from oil to banking to telecoms and are seen as a costly drag on the economy. But analysts expressed disappointment that it fails to address key issues such as monopolies and does too little to reduce the party's role in management.

"China's latest proposals to shake up state-owned industry are underwhelming," said Julian Evans-Pritchard and Mark Williams of Capital Economics in a report.

More ambitious changes were blocked by companies with allies in the ruling party and regulators who don't want to see their status reduced, according to businesspeople and economists.

That might prompt some people to welcome an economic crisis in hopes it would force party factions to cooperate, said Li at Commonwealth Bank of Australia.

"A crisis is not necessarily a bad thing for China," said Li. "It becomes a trigger of reform."