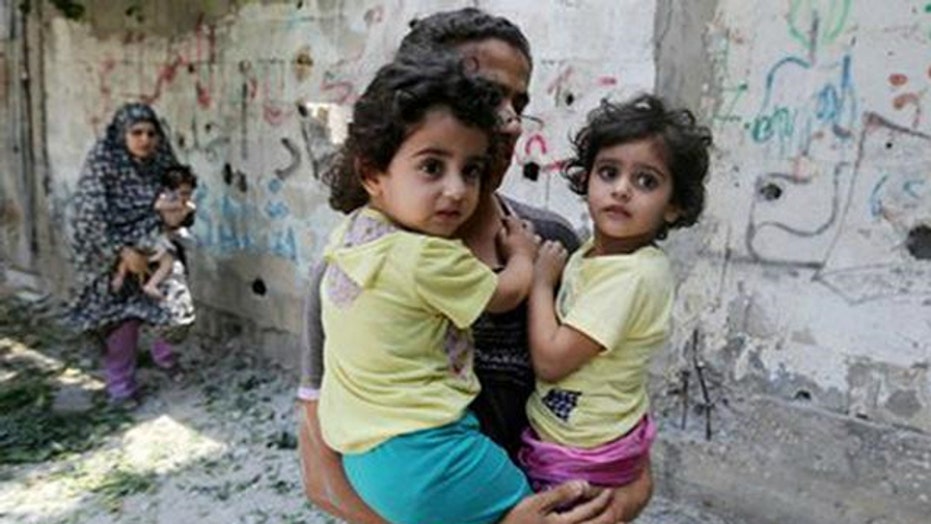 What needs to happen for peace?

GAZA CITY, Gaza Strip – In a replay of the last major Gaza conflict, human rights defenders are again accusing Israel and Hamas of violating the rules of war, pointing to what they say appear to be indiscriminate or deliberate attacks on civilians.

In 2009, such war crimes allegations leveled by U.N. investigators — and denied by both sides at the time — never came close to reaching the International Criminal Court.

Some Palestinians hope the outcome will be different this time, in part because President Mahmoud Abbas, as head of a U.N.-recognized state of Palestine, has since earned the right to turn directly to the court.

Still, the road to the ICC, set up in 2002 to prosecute war crimes, is filled with formidable political obstacles.

Israel and the United States strongly oppose bringing any possible charges stemming from the Israeli-Palestinian conflict before the court, arguing such proceedings could poison the atmosphere and make future peace talks impossible.

If Abbas seeks a war crimes investigation of Israel, he could lose Western support and expose Hamas — a major Palestinian player — to the same charges.

From the first day of the current Israel-Hamas fighting on July 8, human rights groups operating in Gaza have been collecting detailed information about the aftermath of Israeli strikes — more than 4,600 so far, according to the military — to lay the groundwork for legal proceedings.

On a recent morning, her tour of sites hit by Israeli airstrikes included the administration building of the Islamic University, an insurance company office, a mosque and a family home whose five inhabitants, including three children aged 8 to 14, had been buried in the rubble.

At her final stop, the morgue at Gaza City's main hospital, she compared notes with a colleague from another group, Al Mezan, to spot possible discrepancies. Accuracy is key, she said, because the data will have to hold up under global scrutiny.

The material collected by the groups, to be complemented by more thorough investigations after the war, "will be the core (of the case) that goes to the ICC," said Mahmoud Abu Rahma of Al Mezan.

He said military legal advisers clear every army strike in Gaza. "We have a very thorough legal defense, should we need one," he said. "Everything is documented."

After the three-week war that ended in January 2009, a U.N. fact-finding mission headed by South African jurist Richard Goldstone found that both sides had committed potential war crimes — Israel by deliberately or recklessly targeting Gaza civilians, according to the team, and Hamas by launching indiscriminate rocket attacks at Israeli civilians.

Hamas never made a secret of its goal to try to inflict as much damage as possible on Israel. However, Israel complained it was being singled out unfairly by what it portrayed as biased and heavily politicized U.N. institutions, particularly the Human Rights Council that had dispatched the Goldstone team.

Israel defenders argue that the war crimes issue is rife with subjectivity and politics, and that if the standard were applied consistently, Western countries like the United States and Britain would be called to task for their actions in Iraq and elsewhere that also resulted quite predictably in loss of civilian life.

In a 2011 op-ed piece, Goldstone backtracked from the report's allegation that Israel had targeted civilians as a matter of policy, but Navi Pillay, the outgoing U.N. human rights commissioner, said last week that the report still stands.

"What I'm seeing now is a recurrence of the very acts that the Gaza fact-finding mission (of Goldstone) indicated as constituting war crimes and crimes against humanity," she said.

Under the rules of war in the Geneva Conventions, combatants must not deliberately target civilians. They must distinguish between military and civilian targets, refrain from disproportionate attacks and provide effective warning if there is a risk civilians could get hurt in attacks on military targets.

Yet cases often aren't clear cut, and there is much room for interpretation.

"The truth is many of these laws are old, and the written texts don't apply well to modern situations of conflict," said Harold Hongju Koh, an international law professor and a former U.S. State Department legal adviser. "So exactly how the rules apply can be debated."

It's especially difficult to prove intent.

For example, Israeli tank shells last week hit one of three fuel tanks of Gaza's only power plant, sparking a massive fire that burned for several days and forced the plant to shut down. This led to even wider blackouts than before — of 21 hours a day for Gaza's 1.8 million people, disrupting the supply of water pumped into high-rise apartments.

"If that attack was done with intent, as opposed to being a mistake, then it would be a war crime," said Philip Luther, the head of the Middle East-North Africa office of Amnesty International. "Obviously, it's impossible to know, unless the IDF (Israeli Defense Forces) admits that it had been an intended strike."

He said this type of incident should be investigated by an ICC prosecutor.

The Israeli military has refused to comment on the shelling of the power plant and most other strikes. It has issued only general statements, saying it has targeted rocket launching sites, weapons depots and "command and control centers."

According to Al Mezan, more than 800 homes have been destroyed in direct hits by airstrikes or artillery, killing more than 800 people, among them 275 children.

The military has not responded to repeated AP requests to explain in detail why even one of them was targeted.

In dozens of cases, three or more members of one family were killed in the same attack on a house, said the U.N. Office for the Coordination of Humanitarian Affairs. "Such cases raise concern about the targeting of civilians and civilian objects and the launching of indiscriminate attacks," it said.

More than 1,860 Palestinians were killed in the past month, and almost one-third have been women and children, according to the Gaza Health Ministry, Al Mezan and the PCHR, each running independent counts. The Israeli military has estimated that at least 300 Gaza militants have been killed.

Israel has said it is doing its utmost to avoid harm to Palestinian civilians, urging them in phone calls, leaflets and text messages to leave areas about to be attacked. It has also accused Hamas fighters of using civilians as human shields by firing rockets from crowded neighborhoods and storing weapons in civilian locations, such as mosques, schools and hospitals.

Rights groups say civilians need to be able to act on warnings, and that this is often impossible in tiny, crowded Gaza where up to one-fourth of the population has been displaced by the fighting, including 270,000 in crowded U.N. shelters. Some have reported receiving a phone call just minutes before an airstrike hit a home.

Proportionality — or how many civilian deaths are acceptable in an attack on a nearby military target — is another standard open to interpretation.

For example, 10 Palestinians, including five children, were killed Sunday, according to health officials, when an Israeli strike targeted suspected militants on a motorcycle near a crowded U.N. shelter. The military said three militants were killed in the strike. The U.S. State Department said it was "appalled" by the "disgraceful" attack.

Israel argues it has the right to defend itself against rocket fire from Gaza by hitting launch sites, even if located in densely populated areas. At the same time, the military has said it has aborted some attacks when spotting civilians in the area.

Palmor, the Israeli Foreign Ministry spokesman, said Israeli forces have acted in "strict accordance" with international law. Asked about the large number of civilian casualties, he said that even "if the results of war look very ugly and tragic, that doesn't make them necessarily illegal."

Koh said that "the Israelis apply a very expansive view of what constitutes self-defense, and that's based on their history."

Gaza militants, meanwhile, have fired just over 3,300 rockets and mortar shells at Israel in the past month, killing three civilians, injuring about 150 and damaging several homes and a gas station.

Such indiscriminate attacks with inaccurate weapons clearly violate the rules of war, said Hagai El-Ad of the Israeli rights group B'Tselem. "Firing rockets from the Gaza Strip into towns and cities is plain and simple illegal," he said. "I can't imagine there would be a court of law that would decide otherwise."

Luther believes there's a 50-50 chance of bringing the Gaza war before the ICC.

Unlike in 2009, Abbas has the option of turning to the court directly because of the upgrade in legal standing awarded by the U.N. General Assembly in 2012. At the time, the assembly recognized "Palestine" in the West Bank, Gaza and east Jerusalem as a non-member observer state, meeting the ICC requirement of accepting requests for jurisdiction from states over crimes committed in their territory.

After 20 years of failed negotiations with Israel, many Palestinians believe the ICC offers the only opportunity to hold Israel accountable, not only for Gaza military operations, but for continued expansion of settlement-building on occupied lands. With daily scenes of Gaza carnage, the West Bank-based Abbas is under growing pressure to join the court.

He still hesitates, because going after Israel at the ICC would signal a fundamental policy shift, instantly turning his tense relationship with Israel into a hostile one and creating a rift with the United States.

He also has Hamas to consider, since action against Israel would likely trigger a war crimes investigation of Hamas as well. The Islamic militant group seized Gaza from Abbas in 2007, and relations between the two rivals remain tense. However, they reached a power-sharing agreement in the spring and Abbas does not want to return to confrontations with Hamas.

Last week, Abbas told leaders of PLO factions in the West Bank that he would only turn to the ICC if Hamas agrees, in writing. Abbas aide Saeb Erekat told The Associated Press on Monday that he put the request to the top Hamas leader in exile, Khaled Mashaal, in a meeting in Doha last week. Erekat said he was told that Hamas needs time to decide.

In the meantime, the Human Rights Council decided last month to set up a commission of inquiry to look into possible violations of the rules of war in Gaza. It will take time to pick the investigators, define a mandate and send the team to the region.

Israel is not a member of the ICC and didn't cooperate with the Goldstone team, arguing it would not have gotten a fair hearing. It is not clear if Israel will be more welcoming when the new investigators arrive.

By contrast, the Gaza rights groups that handed stacks of documents and photos to Goldstone and helped him meet with victims say they hope to be ready when the new team arrives.

"We are hopeful that, like with Goldstone, we will be able to provide over 1,000 documents to the committee," said Abu Rahma.