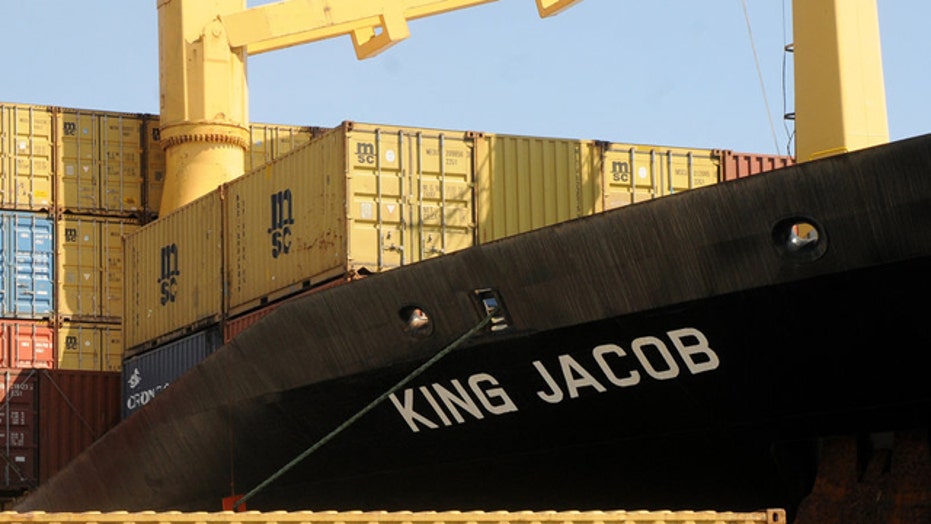 A senior Iranian military official warned the U.S. and Saudi Arabia that blocking an Iranian aid ship bound for Yemen will "spark a fire," but a U.S. Navy official tells Fox News on Wednesday that the situation is “all for show.”

A lone Iranian cargo ship continued to sail in the direction of Yemen Wednesday, a few weeks after a convoy of Iranian ships, carrying weapons, was forced to reverse course after the U.S. Navy sent an aircraft carrier and escort ships to trail the vessels.

"I bluntly declare that the self-restraint of Islamic Republic of Iran is not limitless," Gen. Masoud Jazayeri, the deputy chief of staff, told Iran's Arabic-language Al-Alam state TV late Tuesday.

"Both Saudi Arabia and its novice rulers, as well as the Americans and others, should be mindful that if they cause trouble for the Islamic Republic with regard to sending humanitarian aid to regional countries, it will spark a fire, the putting out of which would definitely be out of their hands."

But the U.S. Navy official said media is onboard the Yemen-bound ship.

"Iran is begging for us to board the ship, this is all for show," he said.

The official told Fox News there is no reason to believe this Iranian-flagged cargo ship, named "Shahid" or martyr in English, is carrying anything other than relief supplies as the Iranians have stated through their state run news agency.

"The Iranians were not subtle last time, they had rocket launchers and other weapons on the decks of their ships, but we are not seeing the same thing now," he said. The ship is less than a week away from Yemen.

Iran says the ship, which departed Monday, is carrying food, medicine, tents and blankets, as well as reporters, rescue workers and peace activists. It says the ship is expected to arrive at Yemen's port city of Hodeida next week. Iran's navy said Tuesday it will protect the ship.

Saudi Brig. Gen. Ahmed Asiri, a military spokesman, said Tuesday that no ship would be permitted to reach Yemen unless there was prior coordination with the Saudi-led coalition that is targeting Yemeni rebels, and that if Iran wants to deliver humanitarian aid it should do so through the United Nations.

It remains to be seen whether the cargo ship will moor in Djibouti, as requested by the Pentagon, in order to offload its cargo to the U.N., or if the ship will sail to Hodeida.

Pentagon spokesman Col. Steve Warren told reporters Tuesday, "If the Iranians are planning some sort of stunt in the region, then they know as well as we do that it would be unhelpful and potentially threaten the cease-fire."

A U.S. Navy official said that while the Iranian Navy is not presently escorting the cargo ship to Yemen, there are Iranian warships from their 34th Fleet off the coast of Yemen right now.

He said the U.S. Navy's Iwo Jima Amphibious Ready Group, carrying 2,000 U.S. Marines and an equal amount of sailors, remain on warships in the area ready to intervene if necessary.

The U.S., which supports the coalition, and Saudi Arabia have accused Iran of arming the Yemeni rebels, known as Houthis. Iran supports the rebels, but both Tehran and the Houthis deny it has provided weapons to them.

There were reports of continued ground fighting in some areas, with security officials and witnesses saying fierce combat broke out about a half-hour after the cease-fire began when rebels tried to storm the southern city of Dhale, firing tank shells, rockets and mortars. But no airstrikes by the Saudi-led coalition were reported.

The conflict has killed more than 1,400 people — many of them civilians — since March 19, according to the U.N. The country of some 25 million people has endured shortages of food, water, medicine and electricity as a result of a Saudi-led naval, air and land blockade.

The Houthis and forces loyal to ousted President Ali Abdullah Saleh overran the Yemeni capital, Sanaa, last September and are currently engaged in an offensive in southern Yemen and Aden -- the south's main city. The offensive forced internationally-recognized President Abed Rabbo Mansour Hadi to flee the country in late March and seek exile in Saudi Arabia.

Fox News’ Lucas Tomlinson and The Associated Press contributed to this report.