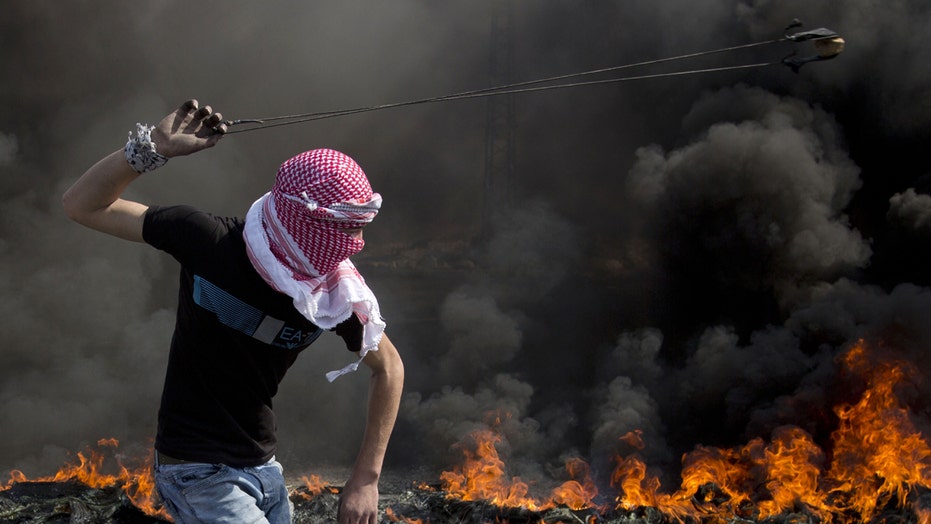 Israeli forces arrested one of the co-founders of the Hamas militant group Tuesday, accusing him of inciting recent violence that has resulted in the deaths of nine Israelis, many in stabbing attacks.

The military said Hassan Yousef was arrested near Ramallah. It marks the most high-profile arrest since a wave of unrest swept through the region a month ago.

The military said Yousef had been "actively instigating and inciting terrorism" by encouraging attacks against Israelis. Military spokesman Lt. Col. Peter Lerner told the Associated Press, "Hamas' leaders cannot expect to propagate violence and terror from the comfort of their living rooms and pulpits of their mosques."

"President Abbas has not condemned a single one of the 30 terrorist attacks against Israelis over the last month and he continues to glorify the terrorists as heroes," Netanyahu said.

Ban is in the region calling for calm in an attempt to curb weeks of violence that has killed 10 Israelis, 43 Palestinians and an Eritrean migrant worker.

On Tuesday evening, Israel's military said its forces killed a Palestinian during a clash along the border with the Gaza Strip. A military statement said the soldiers identified Palestinians preparing to attack soldiers on the Gaza border and "foiled the attack, firing toward the snipers, hits were confirmed."

It said the attackers are from the same cell that has fired on forces near the border before. Gaza health official Ashraf al-Kidra said three Palestinians were injured as well.

Earlier, a Palestinian attacker rammed his car into a group of Israelis waiting at a bus stop at a junction on the outskirts of Jerusalem in the West Bank, the Israeli military said. He then attempted to stab bystanders. A civilian and a soldier were injured in the attack before the attacker was shot and killed, it said.

In a separate incident in the West Bank, an Israeli man was killed after being run over during a clash with Palestinians. The man exited his car after Palestinian demonstrators threw stones at it and he began to hit passing Palestinian cars with a large stick, according to an Associated Press photographer who witnessed the incident. The man hit a passing truck with the stick, and the truck ran the man over. The Israeli military confirmed his death.

The truck driver turned himself in, saying he hit the Israeli by accident while trying to swerve out of the way, according to a Palestinian security official who spoke on condition of anonymity because he was not authorized to talk to the media.

Ban called for calm during a press conference with Israeli President Reuven Rivlin and said "no society should live in fear."

"My visit reflects the sense of global alarm at the dangerous escalation in violence between Israelis and Palestinians," he said. "I am here to encourage and support all efforts to lower tensions and prevent the situation from spinning out of control."

Ban added, "It's not too late to avoid a broader crisis."