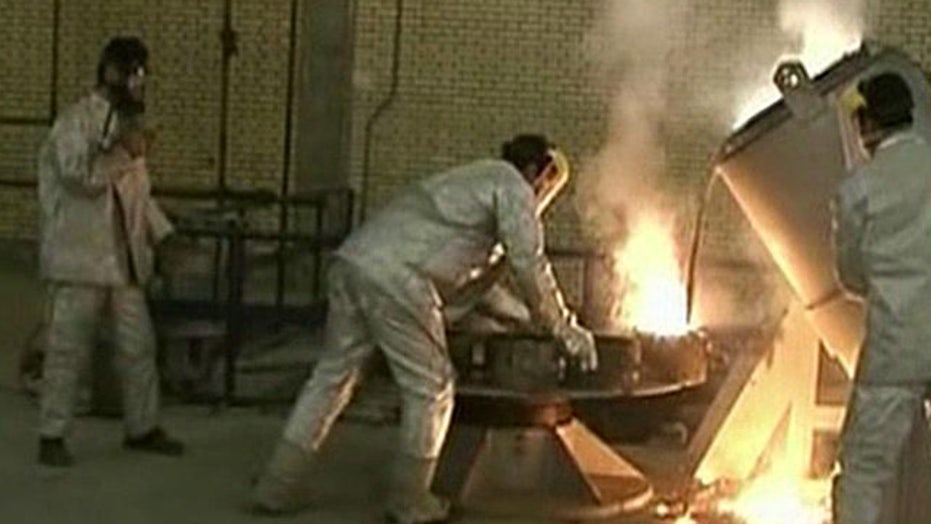 Amb. John Bolton says that ‘Iran is across the line already’

An Israeli defense official says a new report claiming Iran could produce enough weapons-grade uranium to build a nuclear bomb in less than a month is further justification for why Israel will take military action before that happens.

"We have made it crystal clear – in all possible forums, that Israel will not stand by and watch Iran develop weaponry that will put us, the entire Middle East and eventually the world, under an Iranian umbrella of terror," Danny Danon, Israel's deputy defense minister told USA Today.

The United States and other world powers fear Iran is trying to develop nuclear weapons. The Islamic republic says its program is for peaceful energy production, and this week's meetings in part focused on how to scale back its enrichment of material that can be used to generate power or nuclear warhead material.

The Institute for Science and International Security on Thursday issued a report stating that Iran  could produce enough weapons-grade uranium for a nuclear bomb in as little as one month, USA Today reported. The organization's estimates did not include the time required to build a reliable warhead for a ballistic missile

Meanwhile, the Obama administration is asking Congress to hold off on enacting new sanctions against Iran, arguing that a pause in the push to impose new penalties would give negotiators flexibility in talks now underway to get Iran to comply with demands it prove its nuclear program is peaceful.

Even as U.S. officials argue that tough sanctions are what brought Iran to the negotiating table in the first place, the White House and State Department said Friday the administration wants lawmakers to wait on new sanctions legislation to give the negotiations time to get traction. Some lawmakers have argued that now is not the time to ease pressure and that pursuing new sanctions will give the U.S. additional leverage in the talks.

But, State Department spokeswoman Jen Psaki said it was the consensus of the administration's national security teams that a pause "would be helpful in terms of providing some flexibility while we see if these negotiations will move forward." She said the position was delivered to lawmakers and congressional aides at a White House meeting on Thursday.

"We have conveyed that any congressional action should be aligned with our negotiating strategy as we move forward. So while we understand that Congress may consider new sanctions, we think this is a time for a pause, as we asked for in the past, to see if negotiations can gain traction," Psaki told reporters.

She noted that additional sanctions can always be imposed later if the Iranians fail to meet their obligations, and she stressed that no existing sanctions are being lifted.

At the White House, national security council spokeswoman Caitlin Hayden said the negotiations would not last indefinitely without progress and movement from Iran, which has long defied international demands to come clean about its nuclear intentions.

"The window for negotiation is not open-ended, and if progress isn't made, there may be a time when more sanctions are, in fact, necessary," Hayden said. "We have always said that there would be no agreement overnight, and we've been clear that this process is going to take some time."

Bipartisan pressure in Congress to ramp up sanctions on Iran has been rising for some time and hit a new high last week after negotiators from the United States, the other four permanent members of the U.N. Security Council and Germany met with Iranian officials in Geneva.

The chief U.S. negotiator, Wendy Sherman, told Congress before those talks that the administration would support tougher sanctions on Iran if it didn't come to the Geneva talks with "concrete, substantive actions" and a verifiable plan to scale back its nuclear program.

The Senate Banking Committee is expected soon to draft new sanctions shortly after the government reopens, largely mirroring a House bill that passed overwhelmingly by a 400-20 vote in July and blacklisted Iran's mining and construction sectors. It also called for all Iranian oil sales to end by 2015.

The Senate's bill may narrow that timeframe, block international investment in more economic sectors, try to close off Iran's foreign accounts and tighten Obama's ability to waive requirements for allies and key trading partners who continue to do business with Iran.