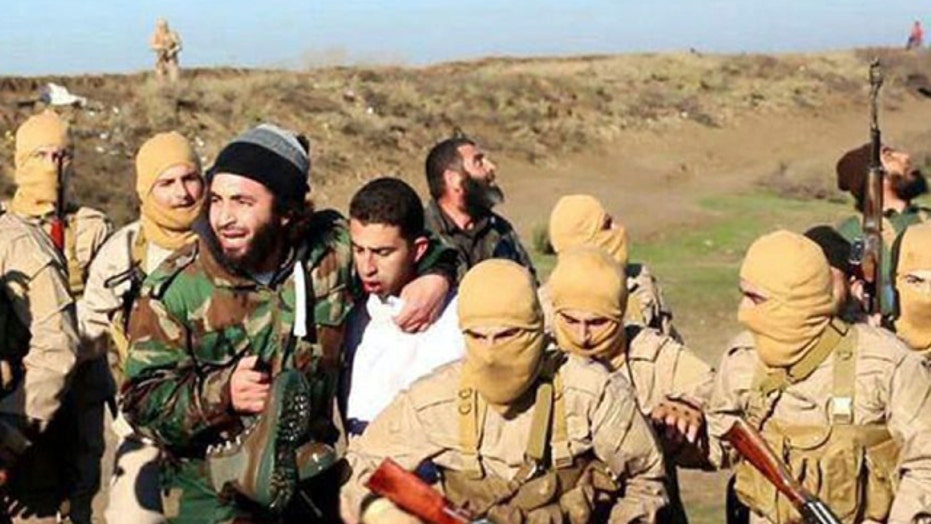 Images out of Syria show crash site, pilot in hands of militants

U.S. officials confirmed reports Wednesday that a Jordanian fighter jet was shot down in the fight against Islamic State militants in northern Syria and that the pilot had been captured.

But officials denied claims made by the terrorist organization that it was responsible for the downing.

In a statement, U.S. Central Command said a Jordanian F-16 was shot down in the vicinity of Raqqa, the de facto capital of the Islamic State group, also known as ISIS, or ISIL.

It was not immediately known how the warplane was shot down. CENTCOM said evidence "clearly indicates" that ISIS did not down the plane.

"We will support efforts to ensure (the pilot's) safe recovery, and will not tolerate ISIL's attempts to misrepresent or exploit this unfortunate aircraft crash for their own purposes," CENTCOM commander General Lloyd J. Austin III, who is overseeing all coalition military operations in Iraq and Syria, said in a statement.

But the Islamic State is known to have stocks of Russian-made Igla anti-aircraft missiles. The shoulder-fired weapon has long been in the Syrian and Iraqi government arsenals — it was used during the 1991 Gulf War by Iraqi forces to down a British Tornado jet, for example. More recently, militants in Chechnya have used them to down Russian helicopters.

Jordanian Information Minister Mohammad Momani told The Associated Press that the plane was shot down by "ground fire" but did not elaborate.

Another group, the Raqqa Media Center, said the warplane crashed near the village of Hamra Ghannam, adding that ISIS militants were searching the area in case there is another pilot.

If ISIS did shoot down the Jordanian aircraft, it would be the first warplane shot down by the terrorist group since the U.S.-led coalition began its airstrikes against the group in Syria three months ago.

RMC published a photograph said to be of the pilot who appeared wearing a white shirt as he was surrounded by 11 fighters, some of them masked.  Another photograph published by the group showed the man -- naked from the waist down and soaking wet -- being captured by three gunmen as he was taken out of what appeared to be a lake.

In Jordan, the pilot's cousin Marwan al-Kaseasbeh confirmed by telephone with The Associated Press that the photos are of his cousin.

"May Allah plant mercy in your hearts and may you release my son,” al-Kaseasbeh’s father, Youssef, told the Jordanian newspaper Saraya, according to the BBC.

Youssef al-Kaseasbeh said he heard the news about his son’s capture after the head of the Royal Jordanian Air Force informed one of his sons.

Mu'ath Safi Yousef al-Kaseasbeh has been a pilot in the air force for six years and was married in July.

The official said any further questions about the alleged capture should be referred to the government of Jordan. He spoke on the condition of anonymity because he was not authorized to discuss the reports by name.

The United States and several Arab allies have been striking the Islamic State in Syria since Sept. 23, and U.S. and other international warplanes have been waging an air campaign against the extremists in Iraq for even longer. The campaign aims to push back the jihadi organization after it took over much of Iraq and Syria and declared a "caliphate."

Saudi Arabia, Jordan, Bahrain and the United Arab Emirates are participating in the Syria strikes, with Qatari logistical support.

The pilot's capture raises a nightmare scenario for Jordan, which has been sharply criticized by militant sympathizers for its participation. ISIS in the past has beheaded dozens of Syrian soldiers it captured in operations around the country. The group has also beheaded three Americans and two Britons.

Asaad Kanjo, an activist based in the northwestern province of Idlib, said ISIS is believed to have acquired the Igla missiles by buying them from mainstream rebel commanders or after some opposition fighters defected and joined the jihadi group.